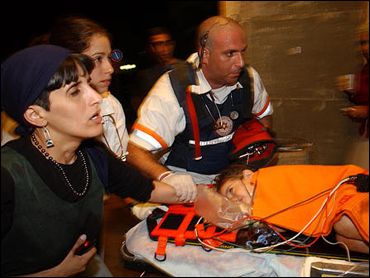 Palestinian gunmen who crossed from the West Bank into Israeli territory killed an Israeli girl and wounded her sister, just minutes after the Palestinian premier met with militant leaders and failed to persuade them to stop attacks.

As part of a cease-fire package, Palestinian Prime Minister Mahmoud Abbas offered the militant Hamas a political role in his government, a participant in the Tuesday talks said, but no agreement was reached.

The shooting late Tuesday near the West Bank town of Kalkilya threatened to ignite another round of attacks and retaliation, further endangering the already wobbly U.S.-backed "road map" peace plan.

Israeli spokesman Dore Gold called the shooting a blow to the plan.

"What's necessary in order to make this whole program work is dismantling the terrorist organizations and disarming them," he told CBS News Correspondent Robert Berger.

Secretary of State Colin Powell is heading for the region over the weekend for high-level talks aimed at salvaging the peace plan, two weeks after President Bush launched it at a summit in Jordan.

Violence has marred the intervening period, as efforts by Egyptian mediators and Palestinian Prime Minister Mahmoud Abbas to persuade militant groups to halt attacks against Israelis have so far not borne fruit. The meetings are to continue through the week, and Egypt plans to invite the various factions to Cairo to finalize an accord.

But the death of the girl in the shooting attack drew an Israeli threat of retaliation.

The shooting took place just inside Israel, close to the West Bank town of Qalqiliya. The military said gunmen used a water passage to get around a protective wall between the West Bank and a main north-south highway and opened fire on the car, carrying a family of eight. The assailant then escaped back into the town.

A 7-year-old girl, Noam Leibowitz, was killed, her 5-year-old sister seriously wounded. Two other family members, a child and grandfather, were slightly wounded, the military and rescue workers said. There was no immediate claim of responsibility. The family are not settlers.

The military imposed a curfew on Qalqiliya and searched for the gunmen.

The week after the June 4 launch of the "road map" plan for an end to bloodshed and creation of a Palestinian state by 2005 was marred by Israeli air strikes and a Hamas suicide bombing in Jerusalem, killing and wounding scores on both sides.

Until the highway ambush, however, there had been four days of relative calm.

Before the shooting, the outline of a truce deal was taking shape in the intensive talks in Gaza, but there was no guarantee that either the militants or Israel would agree to the elements.

Sources close to the talks said a key plank would be an Israeli pledge to stop killing militant leaders. Hamas and other violent groups also demanded Israel release thousands of Palestinian prisoners.

In exchange, the militants would declare a "hudna," the Arabic term for temporary cease-fire. Israelis charge that a hudna would allow militant groups to regroup and rearm.

Israel has been demanding that a cease-fire be the first step of a crackdown to dismantle the groups. Israel TV reported Tuesday that Israel would accept a cease-fire of three to six weeks. Israel officials were not available comment.

Abbas has said he would not order a crackdown, but prefers a voluntary cease-fire.

Abbas held three hours of talks late Tuesday in Gaza with militant leaders, but no accord emerged. Participants said talks would continue.

Ismail Abu Shanab of Hamas said Hamas leaders were "still discussing this subject within the movement and have not yet made a final decision."

Powell was headed to Israel on Friday to meet with top officials in a visit that proves the U.S. commitment to the peace plan, Israeli Foreign Minister Silvan Shalom told Israel Radio.

Speaking on his way to Cambodia, Powell lent support Israel's demand for a crackdown.

Ultimately, Hamas and other terrorist organizations "will not only have to stop these terrorist attacks. We have to eliminate their capability to do so," he said. "We have to come down hard on organizations such as Hamas."

Overnight, Israeli forces blew up the home of a fugitive with the militant Al Aqsa Martyrs' Brigades near the West Bank town of Nablus. The army said Salama was responsible for several attacks.

Israeli forces reinforced with tanks and bulldozers also destroyed four houses where 65 people lived in the Rafah refugee camp in Gaza, Palestinian security sources said. The army said it destroyed three abandoned buildings being used as a base for militants to plant explosives on the nearby Israeli-Egyptian border.