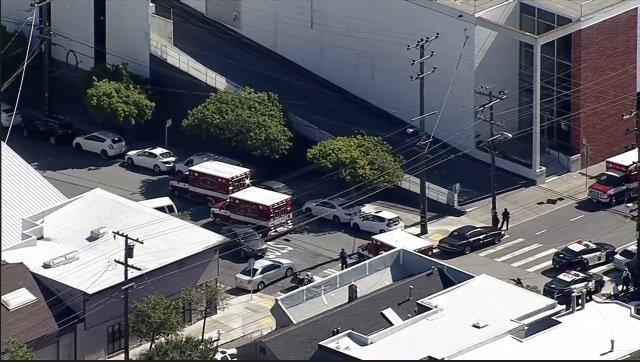 SAN FRANCISCO -- Three people were killed and two wounded Wednesday morning when a gunman opened fire at a UPS facility on San Francisco's Potrero Hill neighborhood, according to police. The gunman then took his own life.

UPS spokesman Steve Gaut told The Associated Press that an employee fired inside the facility before the drivers were sent out to do their normal daily deliveries. Officials, United Parcel Service employees and neighbors described chaos and panic as shots rang out during a morning meeting.

San Francisco police Sgt. Toney Chaplin said at a news conference that three people were killed and two were wounded. Police responded to reports of a shooter in the building shortly before 9 a.m. and evacuated several wounded victims. They determined the suspected gunman was still inside the building.

Family members have identified one of the victims of a shooting at a San Francisco UPS warehouse as 46-year-old Mike Lefiti, a UPS driver.

Lefiti's cousin, Bob Toia, told the San Francisco Chronicle that Lefiti was devoted to his wife, family and kids.

Isaiah Miggins, a co-worker of Lefiti's at UPS, said Lefiti was a big man, but humble and always happy.

By late afternoon, friends had set up a memorial to Lefiti with flowers and balloons at a local supermarket near the UPS warehouse.

Police made entry and encountered the gunman, armed with an assault pistol, and he then turned the pistol on himself, Chaplin said. He was later pronounced dead. Two guns were recovered.

Chaplin said the shooter was dressed in a UPS uniform, but couldn't confirm whether he was an employee.

"This is a tragedy that has touched many lives today," Chaplin said.

Chaplin couldn't speak to a possible motive or whether the victims were targeted. He said the shooter has been tentatively identified, but his identity, as well as the identity of the deceased victims, weren't yet being made public. He said the incident was witnessed by "dozens" and investigators were going through the "painstaking" process of interviewing them.

There was no indication of links to terrorism, he said. San Francisco police tweeted at 10:33 a.m. that the building had been secured. Special operations officers were continuing to search the building for more possible victims and witnesses who sheltered in place, police say.

The wife of one of the survivors told CBS San Francisco that her husband said the gunman broke into a workers safety meeting and shot three employees "execution-style."

"My husband called and was in distress," she told CBS San Franicsco. "So I only got pieces. He just wanted to let me he was okay. He said someone started shooting execution style and he just started running."

Auto shop owner Robert Kim said he heard about five to eight rapid gunshots. The next thing he knew, he said, "there's a mob of UPS drivers" running down the street screaming "shooter, shooter."

Uniformed UPS employees were led out in a line by officers next to a highway. They walked away calmly with emergency vehicles nearby and gathered nearby outside a restaurant.

"It could have been worse," he said, "lives were saved today."

It was not immediately clear how many employees were at the facility, but UPS said the warehouse employs 350 people. The shooter and all the victims were employees, UPS said in a statement.

The shooting led to a massive police response and a shelter-in-place warning for the surrounding area.

"UPS confirms there was an incident involving employees within the company's facility in San Francisco earlier this morning," UPS spokesman Kyle Peterson said in an email. "Local law enforcement have control of the facility and are conducting an investigation. The company is cooperating with law enforcement. We cannot provide information as to the identity of persons involved at this time, pending the police investigation."

The building is on the eastern edge of the city, about 2.5 miles from downtown San Francisco.