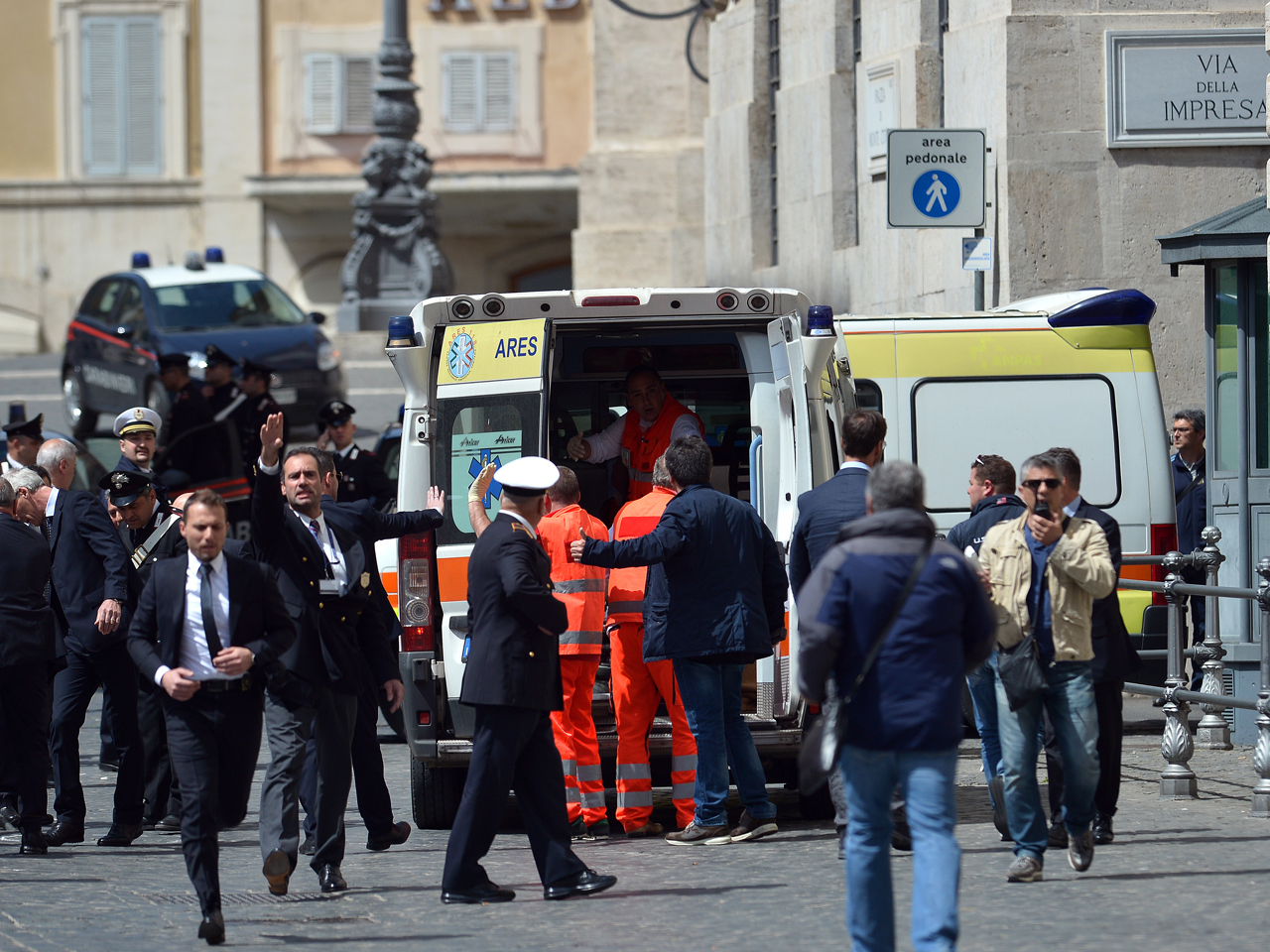 An unemployed bricklayer shot two Italian policemen in a crowded square outside the premier's office Sunday just as Italy's new government was being sworn in, investigators said. The gunman's intended target was politicians but none were in the square so he shot at the Carabinieiri paramilitary police, Rome Prosecutor Pierfilippo Laviani told reporters, citing what he said were the suspect's own words. Mired in recession and suffering from soaring unemployment, Italy has been in political paralysis since an inconclusive February election. Social and political tensions have been running high among voters divided between center-left, conservative and anti-government political parties. Sunday was supposed to be a hopeful day when the debt-ridden nation finally got new government to solve its many problems. But shots rang out in Colonna Square near a busy shopping and strolling area shortly after 11:30 a.m. just as Premier Enrico Letta and his new ministers were taking their oaths at the Quirinal presidential office about a kilometer (half mile) away. The suspected gunman, dressed in a dark business suit, was immediately wrestled to the ground by police outside Chigi Palace, which houses the premier's office and other government offices. The politicians went to the palace later Sunday for their first Cabinet meeting. Laviani identified the alleged assailant as Luigi Preiti, a 49-year-old from Calabria, a southern agricultural area plagued by organized crime and chronic unemployment. The shooting panicked tourists and locals in the square, whose centerpiece is a towering, second-century ancient Roman column honoring Emperor Marcus Aurelius. Rome was packed Sunday with people enjoying the last day of a four-day weekend. Fanuel Morelli, a cameraman working for AP Television, said he was struck by the gunman's firm, calm stance. "When I heard the first shot, I turned around and saw a man standing there, some 15 meters (50 feet) away from me. He held his arm out and I saw him fire another five, six shots," Morelli said. "He was firing at the second Carabiniere, who was about 4 meters (13 feet) in front of him.'" Laviani said Preiti, who was taken to the hospital for bruises, confessed to the shooting and didn't appear mentally unbalanced. "He is a man full of problems, who lost his job, who lost everything," the prosecutor said. "He was desperate. In general, he wanted to shoot at politicians, but given that he couldn't reach any, he shot at the Carabinieri" paramilitary police. One policemen who shot in the neck was in critical condition. The other, shot in the leg, suffered a fracture, doctors said. A woman passing by during the shooting was slightly injured, Rome's mayor said. It was unclear if she was grazed by a bullet or hurt in the panic sparked by the gunfire. The 46-year-old Letta had produced a coalition deal only a day ago between two bitter political enemies — his center-left forces and the conservative bloc of ex-Premier Silvio Berlusconi. Letta will speak to Parliament on Monday, laying out his strategy to reduce joblessness while still sticking to the austerity measures needed to keep the eurozone's No. 3 economy from descending into a sovereign debt crisis. He will then face confidence votes. A video surveillance camera on the Parliament building caught the attacker on film just before and during the shooting, Italian news reports said. The shooter was walking at a steady pace along a narrow street that leads from the square outside Parliament's lower house to the square outside the premier's office when police officers appear to have stopped him to ask where he was going. Shortly after police approached him, he began firing, according to the surveillance camera. Interior Minister Angelino Alfano said the alleged gunman wanted to kill himself after the shooting but ran out of bullets. He said six shots were fired in all. The gunman used a semi-automatic pistol whose serial number had been scraped off, according to Sky TG24 TV. The interior minister said security was immediately stepped up near key venues in the Italian capital, but added authorities were not worried about possible related attacks. "Our initial investigation indicates the incident is due to an isolated gesture, although further investigations are being carried out," he said. The ministers were kept briefly inside for security reasons until it was clear there was no immediate danger. Doctors at Rome's Umberto I Polyclinic said a 50-year-old brigadier had been hit in the neck by a bullet that damaged his spinal column and was lodged near his shoulder. The doctors said it wasn't yet known if the spinal column injury had caused any paralysis. The head of St. John's Hospital, Gianluigi Bracciale, told Sky TG24 TV the second officer suffered a broken leg from a gunshot. He said Prieti didn't appear to have any injuries other than bruises. Preiti's uncle, interviewed by Sky, said the alleged gunman had moved back to his parents' home in Calabria because he could no longer find work as a bricklayer. "He was a great worker. He could build a house from top to bottom," said the uncle, Domenco Preiti. The shooting sparked ugly memories of the 1970s and 1980s in Italy, when domestic terrorism plagued the country during a time of high political tensions between right-wing and left-wing blocs. Among well-wishers for the new Italian government was President Barack Obama. The White House press office said Obama was looking forward to working closely with Letta's government "to promote trade, jobs, and growth on both sides of the Atlantic and tackle today's complex security challenges." There was no direct reference to the shooting in the White House statement.