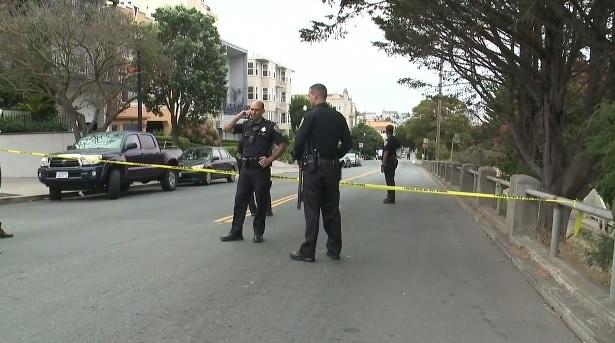 Police are looking for at least one gunman who fled the scene, San Francisco Police Officer Grace Gatpandan said.

Another man was treated and released, he said. The third victim, also a male, is a minor and remains hospitalized but Andrew wouldn't provide any other details about him.

Police said they believe this was a targeted shooting and that there is no imminent threat to the public in the area, CBS San Francisco reports.

Nearby resident Antonia Juhasz said she was sitting in Dolores Park when she heard a burst of gunshots.

"I saw a person with a gun in their hand running," she said. "I think there were a total of three shots."

Juhasz, 47, said she saw two people who had been shot. Both were bleeding as emergency workers carried them away on stretchers, she said.

San Francisco police advised people to stay away from Dolores Park right after the shooting but lifted that advisory two hours later.

Dolores Park sits on a hill in the Mission District and is a popular destination for locals and tourists who come to sunbathe and take in city views. It's near a high school.

Juhasz, who has lived in the neighborhood for more than 20 years, said the park was packed with families and tourists when the shots were fired.

"At first people didn't totally react because it sounded like fireworks," said Juhasz, a writer and freelance journalist. "I was yelling at people, 'It's actually a gun, it's actually a gun.'"

"It was terrifying, mostly because people weren't reacting," she added.

People began running after realizing there had been gunshots, she said.

CBS San Francisco writes that local police is asking witnesses to get in touch with authorities.