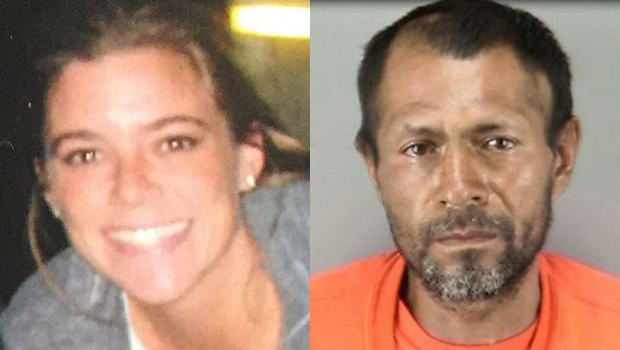 SAN FRANCISCO, Calif. -- San Francisco's city government is under fire after the murder of a woman last week allegedly by an illegal immigrant. The suspect, who had been deported five times, was on the streets after city officials disregarded a request from immigration authorities to lock him up.

On a pier jutting into San Francisco Bay prayers were offered today for Kathryn Steinle, who was shot, apparently at random, while walking with her father, Jim Steinle.

"She was just a young woman, starting to be in her prime," Jim Steinle said. "And had so much to live for."

Kathyrn Steinle's accused killer, Francisco Sanchez, is a convicted drug felon who has been deported to Mexico five times since 1994. The death of the 32-year-old is raising difficult questions for San Francisco which has a Sanctuary Program to protect undocumented immigrants. That means the city doesn't have to turn over non-violent criminals to immigration officials.

Sanchez spoke to a local reporter after his arrest. The reporter asked him if he shot Kate Steinle, the woman down on Pier 14.

Three months ago, Sanchez was released from San Francisco's jail after serving time for a drug charge. City officials, following their Sanctuary Policy, refused to notify Immigration and Customs Enforcement of his release.

In the last 18 months more than 10,000 undocumented immigrants have been released from custody in California without immigration officials being notified.

"I'm not going to address that in detail," said Julie Christensen, a member of the Board of Supervisors.

A local reporter asked her if San Francisco wasn't a sanctuary city, would Kate still be alive.

"I'm not going to go there," Christensen said.

San Francisco Mayor Edwin Lee was not available for interviews today about the killing on this pier. But he did release a statement saying the Sanctuary Policy is, "not intended to protect repeat, serious and violent felons."