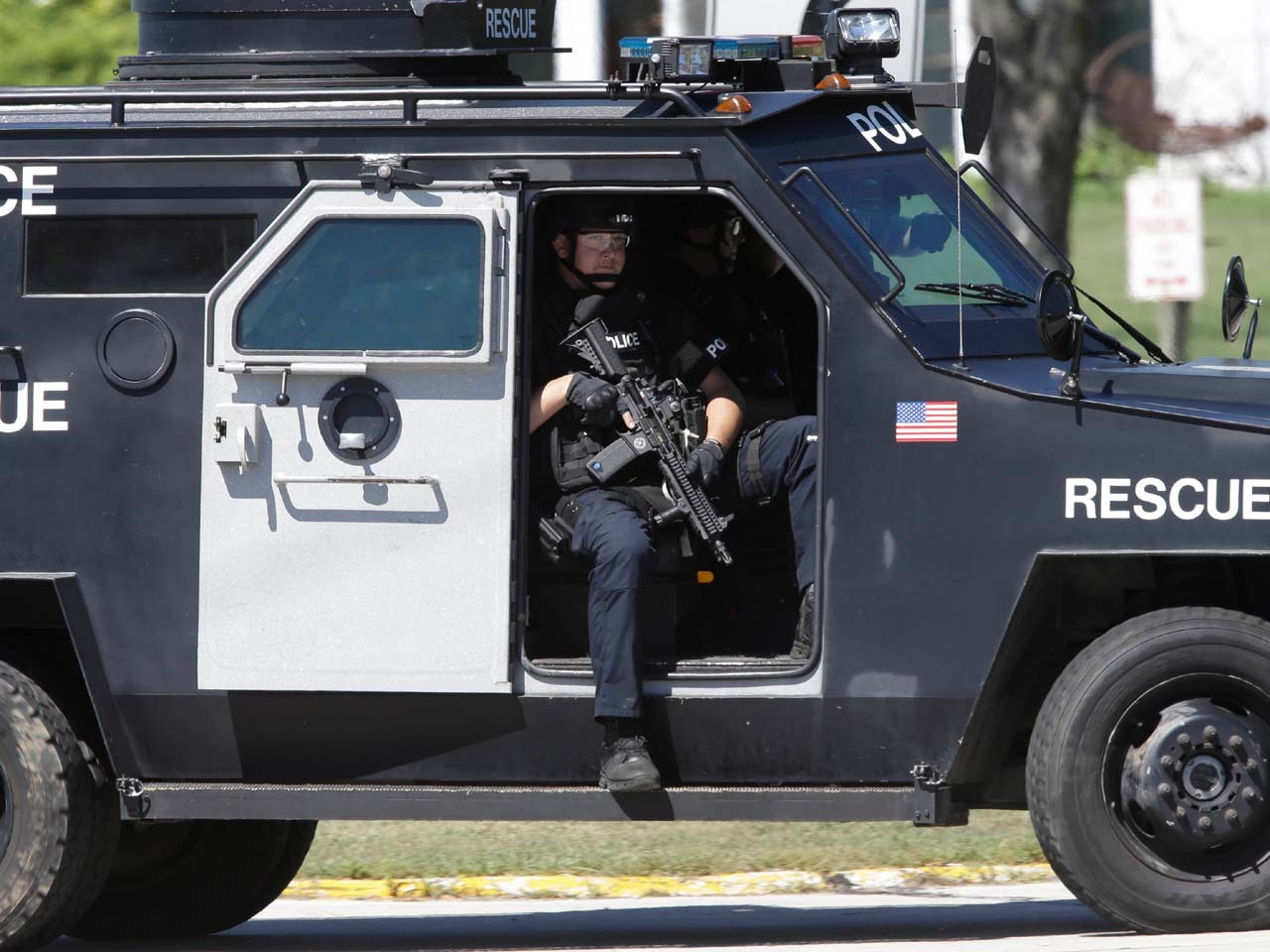 (CBS/AP) OAK CREEK, Wis. - A gunman allegedly killed six people and wounded three others before being shot dead by a police officer at a Sikh temple outside of Milwaukee Sunday morning.

The gunman allegedly shot a police officer ten times as the officer tried to help another victim. The officer survived the shooting, but remained hospitalized Monday morning with serious injuries. The suspected gunman was later confronted and killed by another officer outside the Sikh Temple of Wisconsin in Oak Creek, near Milwaukee.

Late Sunday, the investigation appeared to move beyond the temple as police, federal agents and the county sheriff's bomb squad swarmed a neighborhood in nearby Cudahy, evacuated several homes and searched a duplex. Bureau of Alcohol, Tobacco, Firearms and Explosives agent Tom Ahern said warrants were being served at the home of the shooter.

"He did not speak, he just began shooting," said Harpreet Singh, relaying a description of the attack from the wife of his uncle, temple president Satwant Singh Kaleka.

Law enforcement sources tell CBS News the alleged gunman was a heavy-set, 40-year-old Caucasian male who lived in the area. A search is being conducted of his house.

Officials say he was armed with a 9-millimeter, semi-automatic pistol. The ATF has recovered the weapon and is running a trace. A second gun found at the scene belonged to one of the police officers who confronted the gunman outside the temple.

The suspect, described as heavily tattooed, wore a white t-shirt and black military BDU pants. He also had ammunition pouches.

While the local police have labeled this attack "domestic terrorism," federal sources urge caution with that because the investigation is in its very early stages.

Paul Piaskoski of CBS affiliate WDJT-TV in Milwaukee reports the children inside the temple taking part in a birthday party in the basement of the facility were among the first to hear the gunfire. They allegedly first thought it was fireworks. When they realized it was gunfire, they were the ones who ran and warned the adults.

The police officer who was shot multiple times while helping a victim was transported to a nearby hospital, where he is in surgery. Greenfield Police Chief Brad Wentlandt said the officer, a 20-year veteran, is expected to survive.

The gunman then confronted a second officer, who returned fire, striking and killing the suspect.

Wentlandt said emergency medical personnel identified seven people dead - four inside the temple and three outside, including the suspect.

"Because of the heroic efforts of the officers," said Oak Creek Police Chief John Edwards, "they stopped this from being worse than it could have been."

Edwards referred to the shooting as "a domestic terror-type incident," and said that the FBI will be taking over the criminal investigation, assisted by local police and other agencies.

Although the building has been cleared, the evidence team has still to recover weapons on the scene.

The first 911 call to police about the shooting was received at 10:35 a.m., Wendlant said. Three hours later, police were searching the temple to determine whether the gunman had an accomplice. Eyewitnesses had offered conflicting accounts; several said they believe there was more than one gunman.

A spokeswoman for Froedtert Hospital in Milwaukee, the main trauma center in the area, said doctors there are treating three victims of the shooting. Spokeswoman Carolyn Bellin said the three are all men. One is in the operating room, another is in a surgical intensive care unit, and the third is being evaluated in the emergency room.

Belliin said the hospital is prepared to receive more patients from the shooting, but does not know if more will be on the way.

Among the wounded was the temple's president, Satwant Kaleka, who was shot in the back, according to his sister-in-law, Deepinder Dhaliwal, who spoke on camera to the Milwaukee Journal-Sentinel.

In a telephone interview Sandeep Khattra told CBS News that her grandfather was shot dead, while her mother was among the temple members who hid in the temple's kitchen.

There are more than a dozen ambulances parked outside the temple, and police have corralled media and a handful of bystanders to clear out from the area near the temple.

Sukhwindar Nagr, of Racine, said he called his brother-in-law's phone and a priest at the temple answered and told him that his brother-in-law had been shot, along with three priests. The priest also said women and children were hiding in closets in the temple, Nagr said.

The White House said President Obama was aware of the shooting and was being kept up to date by the FBI.

In a statement the Indian Embassy called the incident "tragic," and said they were in touch with the National Security Council in Washington. India's Consulate General in Chicago is also monitoring the developments, and an official is visiting the site to ascertain the situation.

Wis. Gov. Scott Walker issued a statement, saying, "Our hearts go out to the victims and their families, as we all struggle to comprehend the evil that begets this terrible violence."

Sikh rights groups have reported a rise in bias attacks since the Sept. 11, 2001, terrorist attacks. The Washington-based Sikh Coalition has reported more than 700 incidents in the U.S. since 9/11, which advocates blame on anti-Islamic sentiment. Sikhs don't practice the same religion as Muslims, but their long beards and turbans often cause them to be mistaken for Muslims, advocates say.

Sikhism is a monotheistic faith that was founded in South Asia more than 500 years ago. It has roughly 27 million followers worldwide. Observant Sikhs do not cut their hair; male followers often cover their heads with turbans - which are considered sacred - and refrain from shaving their beards.

There are roughly 500,000 Sikhs in the U.S., according to estimates. The majority worldwide live in India.

Police at this time have not identified another gunman, but Wentlandt said the situation was fluid and a search of the ground is continuing.

According to the temple's website, the temple lies on 13 acres of land. The main brick building, about 17,500 square feet in size, includes a place of worship, a library, an education area, and a playspace for children.

Oak Creek is south of Milwaukee along Lake Michigan.