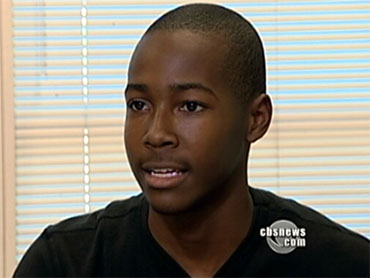 The following report is part of CBS News' ongoing series on education: Reading, Writing and Reform.

The California Academy of Mathematics and Science in south Los Angeles is one of the top high schools in the country, and senior Danial Ceasar is one of its top students, reports CBS News correspondent Bill Whitaker. He's got an A average, and he's ambitious - he wants to be a psychiatrist.

"I'm looking at Berkeley and Stanford as my top schools," Danial said.

But here's a troubling sign of the times: achieving, black, male students like Danial are increasingly rare in America's schools.

"The overall academic achievement of African American males was appallingly low, not only in cities, but nationwide," said Michael Casserly, the executive director of the Council of the Great City Schools.

According to a new study released Tuesday by the Council of the Great City Schools, by fourth grade only 12 percent of black male students read at or above grade level, while 38 percent of white males do. By eighth grade it falls to just 9 percent for black males, 33 percent for whites. Black male students are almost twice as likely as white males to drop out of school. And in some big American cities the dropout rate is around 50 percent.

"Black males now make up only 5 percent of college enrollment nationally, but 36 percent of the prison population," Casserly said.

Dropouts cost taxpayers more than $8 billion annually in public assistance programs like food stamps. It costs on average $25,000 to incarcerate an inmate for a year and only about $14,000 a year of community college.

"We ought to be concerned about the fact that so much talent, so much potential is being wasted and squandered," Casserly said.

Researchers call these dismal numbers a call to action for scholars across the country to study this problem and come up with real solutions.

"The problem can't be quarantined," said Michael Eric Dyson, a professor at Georgetown University. "It's not as if the problems of black males will stay in black communities. These things metastasize across the body politic. They spread out like a cancerous cell. And they begin to impact and affect others."

Danial and others in the self-proclaimed Nerd Herd at CAM High plan to beat the odds.

"I just push myself to make sure I get there and that the generation behind me can look up to people like me," said Jonathan Morant.

Hoping to reverse this pattern of failure.