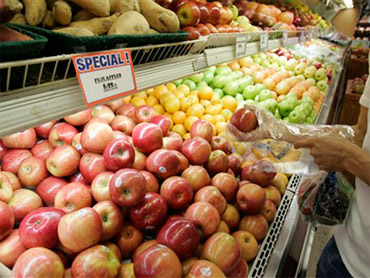 Eating organic foods has lots of benefits, from protecting the environment to helping you stay slim and healthier.

Now, Rodale Inc. CEO and Chairman Maria Rodale is out with a book called "Organic Manifesto: How Organic Farming Can Heal Our Planet, Feed the World, and Keep Us Safe."

Men's Health magazine, which is published by Rodale, Inc., is spotlighting those benefits, especially the ones for men.

Matt Bean, a senior editor of the magazine, spelled out many of those benefits on "The Early Show" Tuesday.

Although organic food is more expensive than conventional food, Bean says making organics a part of your diet can have a big impact on your health and that of your family.

From the book, Bean says, "We discovered ... some pretty shocking and convincing arguments" for going that route.

• More Nutrients: Studies show that organic foods may have increased levels of nutrients like antioxidants than conventionally grown foods

• Immune System Protection: The chemicals in non-organic foods may also harm your immune system, leaving you more susceptible to illness and some forms of cancer

• Hormones and weight gain: New research has shown that some agricultural chemicals could actually be making you fat by interfering with your hormone levels.

When it comes to eating organic, the easiest and most effective way to start is with the basics, explained Bean. Men's Health narrowed down four areas where it really pays to go organic:

• Organic beef comes from livestock that eats an organic diet, and in June, new FDA regulations will mandate that they spend at least 30 percent of their lives grazing on pasture grasses. That's important, because studies show grass-fed meat has 60% more omega-3s, 200% more vitamin E, and 2 to 3 times as much of a cancer-fighting fat called CLA that might even help you lose weight.

• Likewise, organic chicken is healthier than non-organic chicken. One study found that it has 28 percent more omega-3 fatty acids.

• Studies show that organic milk has 50% more vitamin E, 75% more beta-carotene, and 70% more omega-3 fatty acids than regular. It also has more than double the amount of certain antioxidants that have been shown to keep your eyes healthy as you age.

• Organic milk is also free of commonly used growth hormones, which increases infertility in cows and has been linked to prostate and breast cancers in humans.

• It costs about a dollar more per half-gallon, but it's worth it. Plus you can generally cut costs by getting coupons online. Stonyfieldfarm.com, for instance, offers printable coupons on their site.

• Organic chickens, like cows, spend a portion of their life grazing. That means that, along with their organic feed, they have access to the chicken's food of choice, which is a cocktail of worms and grubs. And when animals eat their favorite foods, humans benefit. According to a study from Penn State, eggs from grazing chickens have twice as much vitamin E, 40 percent more vitamin A, and 3 times as many omega-3s. Plus they taste better!

Compared to mass-produced conventional eggs, organic usually costs a couple extra bucks per carton. But again, that's a small price for the health of your body and planet.

• According to estimates by the Environmental Working Group -- the agency that developed the "Dirty Dozen" list -- you can reduce your pesticide exposure by 80 percent simply by choosing organic versions of these 12 fruits and vegetables: peaches, apples, sweet bell peppers, celery, nectarines, strawberries, cherries, kale, lettuce, imported grapes, carrots and pears.

• As a general rule towards fruits and vegetables, when it comes to edible skins you'd be wise to choose organic.

• These 15 fruits and vegetables were the lowest in pesticides, so it's not as important to buy organic versions of them: onions, avocadoes, sweet corn, pineapples, mangoes, asparagus, sweet peas, kiwis, cabbage, eggplants, papayas, watermelon, broccoli, sweet potatoes, tomatoes

• Most of these fruits and vegetables are protected from pesticide contamination by thick skins.

Choosing organic doesn't mean missing out on your favorite foods. Companies have made giant strides in recent years to produce organic versions of some of favorite meals, snacks, and beverages. Here are some of our favorites - you'll find our other picks in the April issue of Men's Health:

Best Breakfast
Kashi Whole Wheat Biscuits, Cinnamon Harvest
• Eat healthy and save money! This box is actually about 50 cents cheaper than Post Shredded Wheat
• One serving has nearly 20% of your daily fiber intake. Plus studies show that the cinnamon in here can help keep your blood sugar stable.

Best Lunch
Amy's Roasted Vegetable Tamale
• Amy's is one of our favorite brands -- the meals are delicious and make it possible to fit organic foods into your diet even when you're too busy to cook.
• They're not always 100% organic, but Amy's makes an effort to keep it as close as possible. This one is 92% organic. Plus it's under 300 calories and carries 8 grams of stomach-filling fiber.
• The tamales contain organic tomatoes, which have 97% more of a class of antioxidants called flavanoids than conventional tomatoes.

Best Condiment
Annie's Naturals Organic Dijon Mustard
• You don't need to sacrifice taste when you're putting together an organic sandwich - this Annie's organic mustard tastes just as good as Grey Poupon.
• Plus unlike a lot of the so-called "gourmet" mustards on the market, it has zero added sugars, so it's virtually calorie free.

Best Cheese
Applegate Farms Organic Mild Cheddar Cheese
• Choosing organic cheese is probably even more important than choosing organic milk, because cheese has a higher concentration of fat, which carries the heaviest dose of the hormones and antibiotics used in non-organic livestock.
• This cheese is available in good supermarkets across the country, perfect for grilled cheese sandwiches.

Best Treat
Newman's Own Organics Champion Chip Double Chocolate Mint Chip Cookies
• These cookies definitely don't taste like health food and are made entirely from organic ingredients.
• Another reason we love Newman's: Most store-bought cookies are made with partially hydrogenated oils and contain small doses of trans fat. Newman's uses palm fruit oil instead, which is lower in saturated fat than butter.

Best Alcoholic Beverage
Samuel Smith Organic Ale
• Organic wine has been around for a while now, but organic beer is gaining ground. This is a full-bodied British brew made with organic barley, hops, and yeast.
• Studies show that a beer or two a day can actually help reduce your blood pressure. And dark beers like ales contain higher levels of antioxidants than lagers.