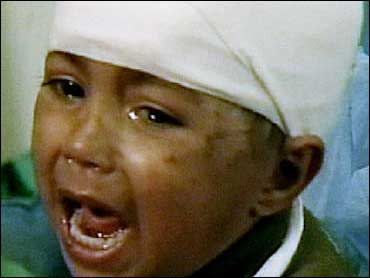 The U.S. military delivered Friday on its promise of "shock and awe" by launching a major air campaign against Iraq, an attack heralded by the sound of air raid sirens and explosions in the center of the Iraqi capital.

Huge explosions rocked Baghdad as a barrage of mighty bombs crashed down on the city of 5 million, sending up huge clouds of smoke and flame.

A huge fire raged to the south of the city; the red glow of the flames illuminated the horizon.

The presidential compound at the Old Palace was struck anew by missiles after a lull in the heaviest attack on Baghdad since the conflict began. The compound also includes a camp of the Republican Guard and presidential units that are the foundation of Saddam Hussein's control.

The missiles were intended for targets in and around Baghdad, he said, and were fired about 20 minutes before the first explosions occurred.

At the same time as explosions rocked Baghdad, Al-Jazeera reported large booms and flashes of light in three directions from Mosul, though no direct hits in the northern city itself. Explosions came from the direction of Dohuk in the north, Kirkuk and the Mosul-Syrian border highways.

Saddam and his lieutenants are "starting to lose control of their country," Defense Secretary Donald Rumsfeld said, speaking at the Pentagon shortly after the air bombardment began.

One senior U.S. official had said the aerial campaign might not be as intense as originally planned — at least in the opening hours — because there was still time for more surrender talks.

The official said Gen. Tommy Franks, the war's top commander, would scale the intensity of the bombardment in accordance with progress in the surrender talks.

However, when asked Friday if the bombing indicated no agreement had been reached with the Iraqi military on surrendering, Rumsfeld responded, "That's for sure."

Aboard the USS Kitty Hawk, scores of bombs were readied to fire and stored in racks.

On the ground, troops pushed 100 miles into the country, a third of the way to Baghdad.

Ordnance crews worked steadily through the day attaching global positioning system and laser guidance kits to 500-pound, 1,000-pound and 2000-pound bombs, and moving the ordnance from the ship's 22 weapons magazine to holding bays.

CBS News Correspondent Cynthia Bowers reports the flight deck of the USS Abraham Lincoln looked like a major airport at rush hour with planes stacked up waiting to take off.

When flight deck personnel were told to prepare for the return of aircraft, the carrier erupted in cheers, says Bowers.

In Baghdad, tracers streaked into the sky over the west bank of the Tigris River, the site of two presidential palaces and many government buildings, including the headquarters of the Baath Party and the intelligence service.

Elsewhere, U.S. Marines were in full control of the strategic port of Umm Qasr in southern Iraq, a British military official said Friday.

"Umm Qasr has been overwhelmed by the U.S. Marines and now is in coalition hands," Adm. Michael Boyce, chief of the British defense staff, said in London.

British forces in the area were dealing with "significant numbers" of Iraqi troops who had surrendered, Boyce said, but he could not be more specific.

Umm Qasr, located along the Kuwait border about 290 miles southeast of Baghdad, would give U.S. and British forces access to a port for military and humanitarian supplies and speed the clearing of Iraqi resistance in the south.

In far western Iraq, troops seized two airfield complexes, known as H-2 and H-3, without much resistance from Iraqi troops, defense officials said. But they called control of the installations "tentative."

They are important partly because Saddam Hussein is believed to have Scud missiles there. The H-3 airfield has been one of Iraq's primary air-defense installations.

The war's first casualties were reported.

Two U.S. marines with the 1st Marine Expeditionary Force were killed — one in a gunfight as his unit advanced on an oil field, the other while fighting enemy Iraqi forces near the port of Umm Qasr.