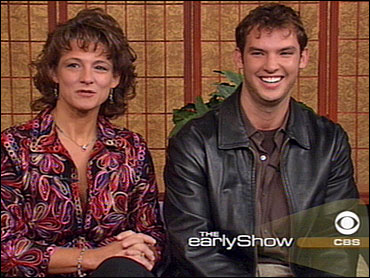 There was a huge meltdown in the Mayan Empire last night as both Yaxha and Nakum were forced to go to tribal council. In round one, there was an all-out brawl between Judd Sergeant and Margaret Bobonich. In round two, Brian Corridan got knocked out by a sucker punch.

"I was confident. This is the outwit part of outwit, outplay, outlast. Like, I know what's going on," Brian told The Early Show co-anchor Rene Syler.

Brian said he thought his plan was going to work, but his tribe played him. Explaining his strategy, he said, "I went into the tribal council with a strategy to have Nakum split their vote between me and Amy, as they had between me and Blake, so Gary, Amy and I could have a majority just by three people, and then take out Bobby Jon, who is great."

He said he knows why Amy O'Hara and Gary Hogeboom stabbed him in the back.

"They both made a deal with Danni and Bobby Jon to first vote off Blake, then me," he said. "I was targeted because I was not as big as Bobby Jon and Brandon. And the tribe didn't want to vote off any women. And Amy was so impressive despite her ankle that you couldn't vote her off."

Well, to see if his theory is right, The Early Show revealed a secret scene. It was Danny talking to the cameras, followed by her exchange with Gary, and then Gary seen just speaking to the cameras by himself.

Danni to Gary: "I want to make sure we're all in agreement of what to do. And I don't want to say Amy. I know her ankle is bad, but she came back on."

Gary: "I love Brian. I say we keep Amy and we vote for Brian."

Just Gary to the cameras: "This is tough and ugly. Fifteen days we've been out here with Brian. This is going to be tough because he is such a good kid. The bottom line is it's him or me. And I'm glad it's him and not me."

Amy had sprained her ankle twice and it was swollen. Some may see that as a liability but Brian said he knew he could not compete with her.

"I knew it wasn't going to be Amy just because her ankle, it snapped, and then she goes to knock this 500-pound ball over — 500 pound and 250-pound Judd on the other side so 750 pounds they are pushing it," Brian said. "It's not going to happen. You're not moving it. He's the anchor, as we would say. Amy was a hero with that ankle. How do you vote someone off after she comes through like that? You can't call it a liability when she wins the challenge with a broken ankle."

"Judd is very confrontational. That's the way he was for a good period of time before Tribal Council even came about," she told Syler. So why did he have it in for her?

"Judd from the very beginning, after our trek through the jungle, didn't like the attention put on the other tribe mates, Bobby Jon, Jim, Blake, when they were down. And, according to Judd, he really wasn't sick at all. But he was. Judd would minimize his down falls or any of his weaknesses. And that's the way it was."

The beers didn't help, Margaret said. She pointed out she was even afraid he would get physical.

"It was very emotional at Tribal Council to be treated the way Judd treated me, and to be so aggressive," she said. When asked if other tribe members were afraid of him, as well, she said, "He's very scary, and I think they were. I really do."

Today, she said she has moved on and there are no regrets for the way she played the game.

"My heart is as a nurse. And I would have treated Judd with kindness and compassion the same way," she said. "I put it behind me. There are so many other things out there, so many other health issues. He's not my neighbor. I don't have to live beside him."

There are also no hard feelings from Brian.

"I honestly have no bad words for Brandon, Bobby Jon, Gary, Danni and Amy. Good people. Even Blake is a great guy."

Oh yes, Blake Towsley, Brian said. "As much hell as I put him through, you know, it really wasn't even the reason he got out ousted. I shouldn't completely admit to that."

So what was all that about Brian's "Bait Blake" strategy?

"Good times. Good times," Brian said smiling. "Blake is a very intelligent person and articulate, and he spoke a lot about himself. It was a Hail Mary throw for me to try to get Blake out. I think Gary and Danni were more involved in it that it showed, but I was playing the game."

Terms to Never Use in Your Resume
View CBS News In
CBS News App Open
Chrome Safari Continue
Be the first to know
Get browser notifications for breaking news, live events, and exclusive reporting.