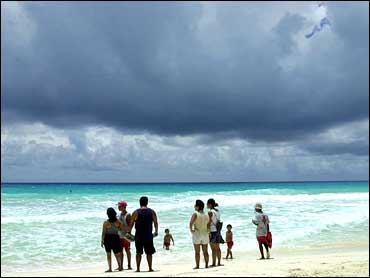 Mexican authorities issued hurricane warnings and tourists took last-minute dips in the turquoise waters of the Caribbean on Thursday as a strengthening Tropical Storm Claudette churned toward Mexico's Yucatan Peninsula.

A hurricane warning was in effect for the entire length of the eastern Yucatan including Cancun, as well as for the nearby island of Cozumel, a frequent stopover for cruise ships.

The storm, packing maximum sustained winds of near 70 mph, with higher gusts, was about 250 miles southeast of Cozumel and moving northwest at 14 mph.

That track could bring Claudette's center near or over the northeastern Yucatan Peninsula on Friday, the U.S. National Hurricane Center in Miami said.

Tropical storm-force winds extended up to 160 miles from the center of Claudette, which was expected to reach hurricane strength later Thursday. Tropical storms become hurricanes when sustained winds reach 74 mph.

Authorities are evacuating tourists and residents in a small, beachfront community three hours south of Cancun. But there were few signs of pending trouble ahead of the storm in Cancun, a resort famous for its dazzling white-sand beaches.

Surfers sailed across sun-dappled waves while tourists swam in the sea or relaxed in lounge chairs under brightly colored umbrellas.

"You can see we're not too worried," said Naomi King, a 19-year-old accountant from London, as she strolled back to her lounge chair from a plunge in the Caribbean.

King, wrapping up a week's vacation with her boyfriend, said they had no plans to leave before their scheduled Friday flight.

Others took the storm more seriously.

Elide Castillo, 38, dismantled her red, flowered beach umbrella while her three sons, still dripping from a last-minute swim, gathered their things for an early trip back home to Chetumal, on Mexico's southern border with Belize.

A tropical storm warning was in effect from Chetumal south to Belize City.

Castillo said she and her family planned to stock up on water and other supplies and had researched shelter locations in Chetumal.

Rosio Hernandez, who arrived in a still-sunny Cancun on Thursday morning for a week's vacation with her husband and three children, said she didn't hear about the storm until late Wednesday, when it was too late to change her plans. They planned to tough it out.

"It's our only vacation of the year," she said.

No flights had been delayed or canceled at Cancun's airport Thursday, airport spokesman Eduardo Rivadeneyra said.

Claudette, the third tropical storm of the Atlantic hurricane season, developed in the Caribbean on Tuesday. Before heading toward Mexico it brushed Jamaica's southern coast with heavy rain and rough surf, battered the south coast of Cayman Islands with dangerous waves and above-normal tides and scattered rain over parts of Cuba.