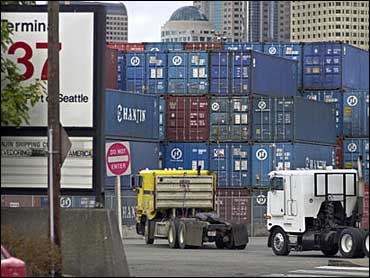 Ports on the west coast of America creaked back to life, but resentment simmered as managers watched for slowdowns and dockworkers accused them of looking for an excuse to drag the dispute back to court.

The Pacific Maritime Association spent the day poring over data from shipping companies and terminal operators at the nation's 29 major ports in Washington, Oregon and California, looking for any sign of slacking on the part of the dockworkers.

A spokesman for the Pacific Maritime Association, which represents shipping lines and terminal operators, first described work as "adequate," but as Thursday wore on, was more pessimistic, saying the pace had become "sluggish."

"We're certainly not where we wanted to be today," said association spokesman Steve Sugerman, adding that they hope to "see improvement" Friday.

The 10,500 dockworkers began returning to their jobs Wednesday after President Bush obtained a court order ending the 10-day shutdown that caused cargo to pile up and cost the U.S. economy as much as $2 billion a day.

U.S. District Judge William Alsup's original order was to expire Oct. 16, when he would determine whether to extend it into an 80-day "cooling-off period" under the Taft-Hartley Act. On Thursday, the International Longshore and Warehouse Union and government lawyers agreed to extend the order for the 80 days without going back to court, lawyers for the union and association said.

On Thursday, Gap Inc. became one of the first major retailers to reveal the impact of the shutdown. The clothing chain said shipping delays could shave as much as $60 million from its holiday season profits.

Officials at a Mitsubishi plant in Normal, Illinois, said production would remain suspended through at least Friday as workers await key parts.

The shutdown began when the maritime association locked out the longshoremen, complaining that they were engaged in an illegal slowdown.

After the docks reopened, both sides acknowledged that the work pace is likely to be slower initially because of the mountains of cargo and other problems, such as misplaced containers and equipment.

If the association sees evidence of a slowdown, it can go to a federal judge and ask that union members be compelled to work at a normal pace.

Union spokesman Steve Stallone said he expects the association to seize on statistics from the least successful port reopening and run to court with claims of a slowdown.

"What they're doing that for is to come up with something they can use to press the case," he said.

Officials at the International Longshore and Warehouse Union have promised to work as hard as they can without sacrificing safety.

Even under ideal circumstances, it will take weeks to ease the bottleneck. Perishable products have first priority.

He said it was too early to tell if the delay was caused by the large number of truckers who rushed to the terminals or by the pace of longshoremen's work.

In Portland, the docks opened Thursday morning to a chaotic scene.

"Terminal operators don't even know where cargo is," said Leal Sundet, an official with the local union chapter. "They put trains everywhere they could. Containers are piled up on top of each other. It's a mess."

The major ports in Washington state were humming along nicely, officials said.

"They're getting the work done," said Mick Schultz, spokesman for the Port of Seattle. "The productivity level is good. The pace of the work here is good. It's at or very close to normal."

The longshoremen's contract expired July 1 but was extended several times before Labor Day. The sticking point in negotiations is whether jobs created by new technology will be unionized.