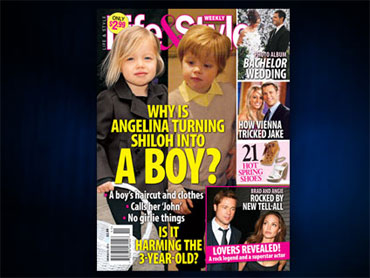 Shiloh Jolie-Pitt is one of the youngest style icons in the world. Whether she's accompanying her famous parents Brad Pitt and Angelina Jolie on one of their international adventures or playing with her toys, Shiloh is always magazine cover ready. But has she become too much of a "he" in her wardrobe choices, and with her recent hair cut?

"The reaction was absolute shock," she said. "We could not believe she's gone as far as this. She's been a tomboy, dressed very boyish, has a sword and a self-professed love for Peter Pan, but all of a sudden now she's looking like their fourth boy."

But is that a problem?

Robi Ludwig, Psy.D, contributor for Care.com, said, "I think kids go through phases. So I don't think anybody should be too concerned. But I really do think that (Jolie and Pitt are) probably just following her lead here. That she has a preference for boys' clothes and short hair and that's really what you want to do as a parent anyway."

But "Early Show" co-anchor Maggie Rodriguez posed the question of whether or not that could confuse a child about their gender identity.

Ludwig said, "It's really not uncommon for people to go through phases where they want to look like a boy or even pretend they're a boy or play boys' games. And really, at one point, they decide, 'is it worth it to be out of sync with my peers.' And in some cases, it's not a choice and even in major cases, where children are not clear what their gender is, parents and psychologists are suggesting go with your kids' lead because you really want to support their happiness and security."

Ludwig said, "The downside (to that) is that you're not supporting your child's choices, and that could lead to them being you don't love them as you are."

"But you're the adult," Rodriguez said. "Some people would have to say, 'You have to guide them.'"

"True," Ludwig said. "Here's where I would say: There's a caveat. If you're supporting your kids' choices, and they're in school and there's a chance this they could get made fun of, you do want to protect them from the harsh onlookers and you don't want to put them in that position. But really, if a child feels that they want to do this and they feel that it's not good for them not to do it, you want to support them, but help them negotiate life in a way that feels tolerable to them."

As for the magazine, Rodriguez said it's sure to fly off the newsstands because of Pitt and Jolie's star power.

Callan said, "They're the biggest celebrities we have at the moment around. These two huge A-list stars, of course when they came together, (created) a huge amount of controversy over that. So the minute they started having children, that was it. It just increased headlines."

Ludwig added Jolie's fashion icon status is also of interest here. The fact that her daughter wants to look more like her father, she said, is interesting.

Rodriguez added the press doesn't know what Jolie looked like as a child, that she herself could have dressed like a boy.

Ludwig said, "There are a lot of tomboys who turn out to be supermodels, and she could end up being a fashion icon herself. So it really is too soon to tell."