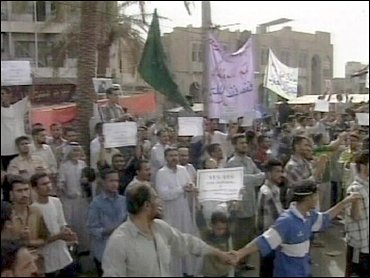 In the biggest anti-U.S. demonstration since the end of the war, thousands of Shiite Muslims marched peacefully through Baghdad on Monday to protest the U.S. occupation and reject what they feared would be a U.S.-installed puppet government.

Small groups of U.S. infantrymen, including snipers on nearby rooftops, watched the rally but did not intervene. Several dozen Shiite organizers armed with AK-47 assault rifles patrolled the area. They, too, were left alone by the Americans.

Up to 10,000 people gathered in front of a Sunni Muslim mosque in Baghdad's northern district of Azimiyah, then marched across a bridge on the Tigris River to the nearby Kadhamiya quarter, home to one of the holiest Shiite shrines in Iraq.

"What we are calling for is an interim government that represents all segments of Iraqi society," said Ali Salman, an activist.

Some carried portraits of the late Ayatollah Ruhollah Khomeini of Iran, senior Iraqi Shiite clerics and of Imam Hussein, one of the most revered Shiite saints.