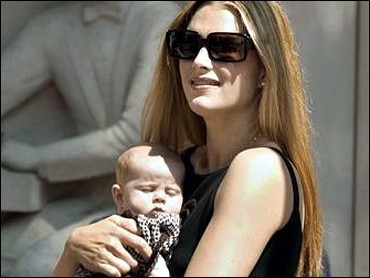 Brooke Shields, the mother of a nearly 1-year-old daughter, is writing a book about postpartum depression. Hyperion plans to publish "Down Came the Rain" in the spring of 2005.

"By sharing my experience, I hope to shed light on a real, yet often hidden or ignored problem that affects women of all walks of life in varying degrees," the 38-year-old actress said in a statement Monday.

"I also hope that by being honest about the fear, shock and shame I felt, it will help others avoid the pitfall of postpartum depression and open up a community of support."

Shields, who is married to writer-producer Chris Henchy, gave birth last May to a baby girl, Rowan Francis.

The actress, who began modeling as a toddler, has appeared in films including "Pretty Baby," "The Blue Lagoon" and "Endless Love." Her NBC sitcom, "Suddenly Susan," ended in 2000 after four years.