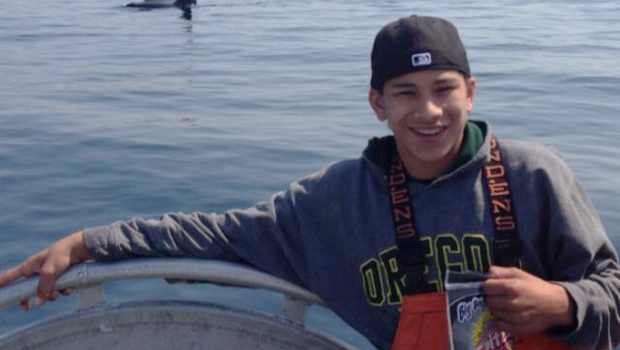 MARYSVILLE, Wash. - Investigators say that a gunman responsible for a shooting at a Washington state high school on Friday invited his victims to lunch by text message.

Snohomish County Sheriff Ty Trenary told a news conference Monday the five students were all at a lunch table when they were shot by 15-year-old Jaylen Fryberg.

Trenary also confirmed that the .40-caliber handgun used in the shooting had been legally purchased by one of Fryberg's relatives. It remains unclear how Fryberg obtained the weapon.

The sheriff said investigators continue combing through a massive amount of text messages, phone records and social media posts as they search for an explanation for the shooting - but he also says they may never find one.

Two 14-year-old girls were killed, and three students remain hospitalized. Fryberg also killed himself. Trenary said that while a teacher tried to intervene, she did not have any physical contact with the gunman before he killed himself.

As more details emerge in the criminal case, the community wondered why a popular homecoming prince would open fire Friday in Marysville-Pilchuck High School cafeteria.

"We can't answer that question," said Matt Remle, a tribal guidance counselor who has an office at Marysville-Pilchuck High School, which is 30 miles north of Seattle. "But we try to make sense of the senselessness."

The shooter, Jaylen R. Fryberg, was from a prominent Tulalip Indian family.

"We are devastated by this senseless tragedy," her family said in a statement, read at a news conference by Dr. Joanne Roberts. "Gia is our beautiful daughter, and words cannot express how much we will miss her."

The Snohomish County medical examiner's office on Monday officially released the names and causes of death of one of the victims and the gunman, a popular freshman who opened fire Friday.

Three other students remain hospitalized, two in critical condition and one in satisfactory condition.

On Sunday, parents and students gathered in a gymnasium at the school for a community meeting, with speakers urging support and prayers and tribal members playing drums and singing songs. Fryberg was from a prominent family from the Tulalip Indian tribes.

"We just have to reach for that human spirit right now," said Deborah Parker, a tribal member.

Young people hugged each other and cried as speakers urged people to come together.

"Our legs are still wobbly," said Tony Hatch, a cousin of one of the injured students.

Of the wounded students, only Nate Hatch, 14, who was shot in the jaw, showed improvement, having been upgraded to satisfactory condition Monday. He remained in intensive care at Harborview Medical Center in Seattle and was awake and breathing on his own, hospital spokeswoman Susan Gregg said. Andrew Fryberg, 15, was in critical condition in intensive care at the hospital. Both are cousins of Jaylen Fryberg.

As the community looked for comfort, a makeshift memorial on a chain-link fence kept growing Sunday. Balloons, flowers, stuffed toys and signs adorned the fence near the school, which will be closed this week.

Meanwhile, the close-knit community on the nearby Tulalip Indian reservation struggled with the news that the shooter was a popular teenager from one of their more well-known families.

Remle said he knew Fryberg and the other students well.

"My office has been a comfort space for Native students," he said. "Many will come by and have lunch there, including the kids involved in the shooting."

They all were "really happy, smiling kids," Remle said. "They were a polite group. A lot of the kids from the freshman class were close-knit.

These factors make the shooting that much more difficult to deal with, Remle said.

"Maybe it would be easier if we knew the answer," he said. "But we may never know."

Elon Musk had twins last year with a top executive: report
Thanks for reading CBS NEWS.
Create your free account or log in
for more features.
View CBS News In
CBS News App Open
Chrome Safari Continue
Be the first to know
Get browser notifications for breaking news, live events, and exclusive reporting.