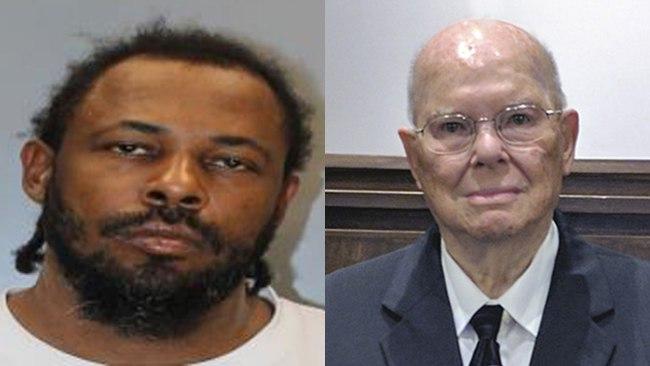 COLUMBIA, S.C. -- An 81-year-old Sears worker whose job was to stop shoplifters was killed by two men who shoved him down while stealing television sets from a South Carolina store, a sheriff said Wednesday.

Sheriff Leon Lott charged the men with murder and strong-arm robbery when the worker died, four days after his head hit the store's concrete floor.

The victim, Duaine Hamilton, was "enjoying the golden years of his life, and it was just snatched from him by these two punks who wanted to go steal two TVs," Lott said at a news conference.

Jeffrey Simmons, 58 is in jail and Jason Randolph, 40, is being sought.

"It wasn't a struggle. They just struck him. He's 81 years old. He attempted to stop them by standing in front of them and they just attacked and knocked him down. And they still stole the TVs," Lott said.

"By all rights he should have been home playing with his grandchildren," Watts said.

Hamilton was an Air Force veteran who retired from AT&T and then went to work for Sears 13 years ago, the sheriff said.

Lott said the attack was caught on the store's security cameras, but his spokesman, Lt. Curtis Wilson, said that out of respect to the victim's family, the sheriff didn't want to release the recordings Wednesday, since they were holding his funeral.

"They are used to going into wherever they want to go in and stealing stuff and getting away with it," the sheriff said.

Simmons remained in jail. It wasn't known if he had a lawyer.