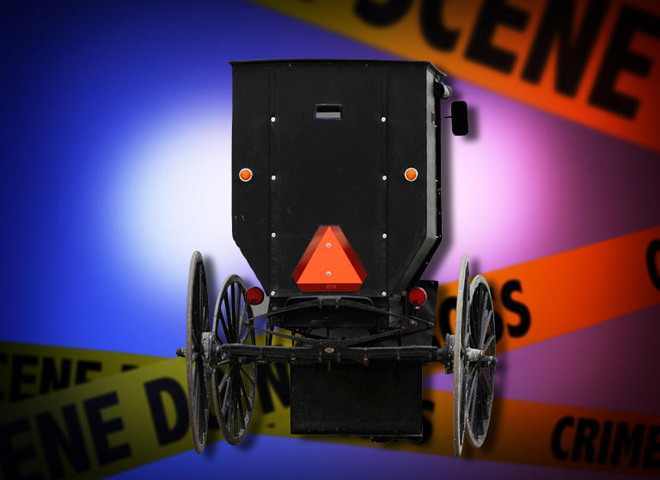 FREDERICKSBURG, Ohio - A man cleaning his muzzle-loading rifle shot the gun into the air, accidentally killing a 15-year-old Amish girl driving a horse-drawn buggy more than a mile away, a sheriff said Tuesday.

Rachel Yoder was shot in the head Thursday night while traveling to her home in Wayne County, between Columbus and Akron. She had attended a Christmas party for employees, most of them under 18 years old, at an Amish produce farm and was riding home alone when she was shot, Wayne County sheriff's Capt. Douglas Hunter said.

Hunter said his department had traced a trail of blood along the road for about three-eighths of a mile into Holmes County in an area of farms and rolling hills.

Holmes County Sheriff Timothy Zimmerly said investigators figured out what happened after the gun-cleaner's family came forward and after his neighbors reported hearing a shot at about the time the girl was wounded.

The man had fired the gun in the air about 1.5 miles from where Yoder was shot, Zimmerly said. State investigators were checking the rifle for a ballistics match, he said.

"In all probability, it looks like an accidental shooting," Zimmerly said.

Yoder was born in nearby Mount Eaton and attended the Old Order Amish Church, The (Wooster) Daily Record reported. She is survived by her father, 10 brothers and sisters, 26 nieces and nephews and two grandparents.

Hunter said earlier there was no indication the shooting was related to a rash of beard-cutting attacks against Amish men in a feud over church discipline.

Still, the mystery of the shooting in the wake of the beard-cutting attacks had left the Amish shaken and "on pins and needles," Zimmerly said.

Zimmerly said he informed the Yoder family that the shooting appeared to be accidental. The shooting has initially been ruled a homicide.

"Obviously, that makes them feel a lot better than if someone might have been targeting the Amish or (if it was) a random shooting murder," he said.

Gun violence in Amish communities is rare but not unheard of. A man shot 10 schoolgirls, killing five, inside a one-room schoolhouse five years ago in Nickel Mines, Pa. The Amish were praised for their forgiveness after the shooting and reaching out to comfort the gunman's widow.