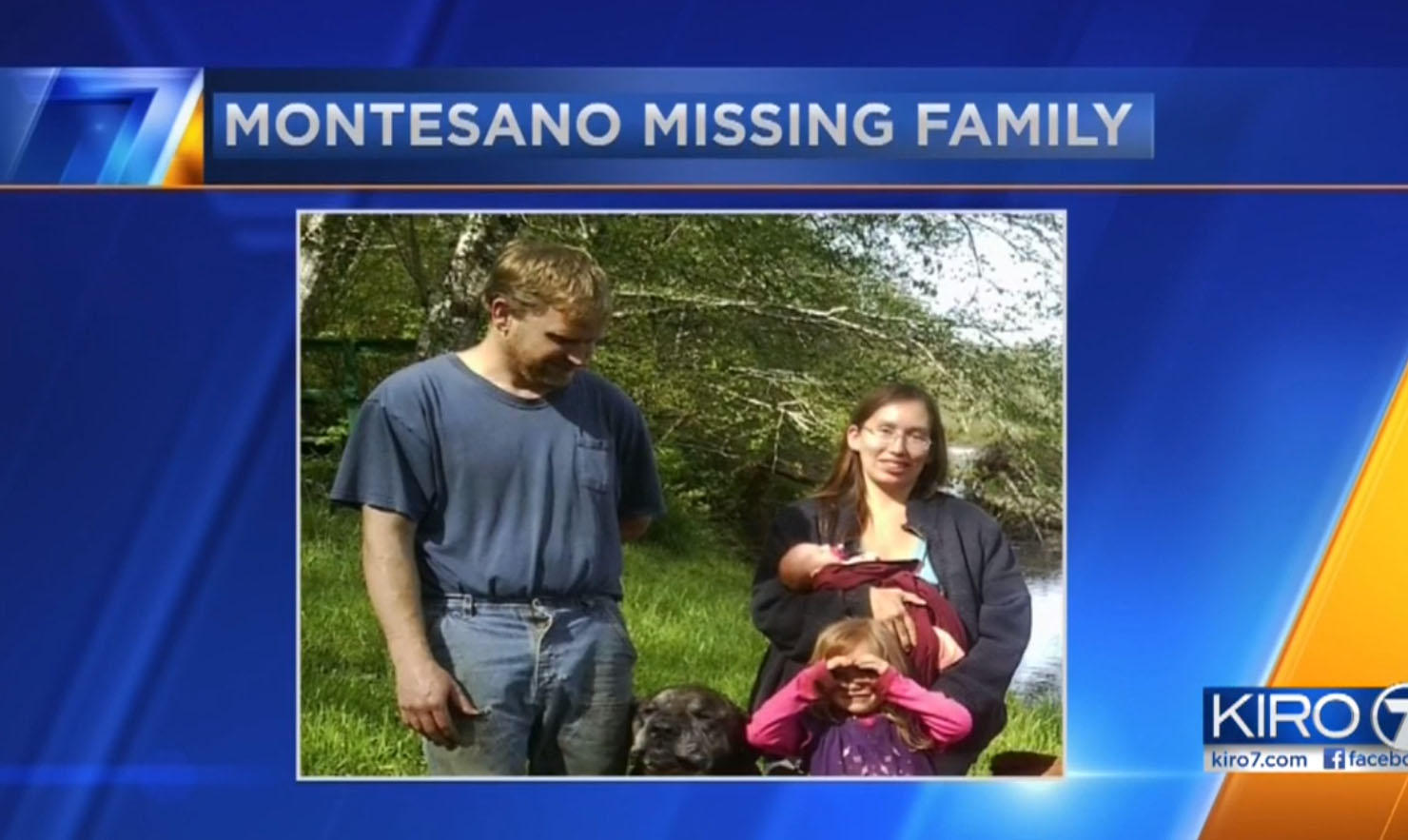 SEATTLE -- Hunters found a Washington state couple and two of their children walking along a remote logging road southwest of Seattle on Thursday, two days after they failed to pick up their older kids after school and were reported missing, authorities said.

Jason and Melissa McAlister had gone for a drive Tuesday with their 8-month-old and 2-year-old, and got stuck when the road gave way as they tried to maneuver their van around a downed tree north in the rugged country in Mason County.

“This one was a trooper,” he said, referring to his 2-year-old daughter. “She was rooting around in the van, finding all kinds of Halloween Candy.”

The family started walking back toward the main road at about 1 p.m. Tuesday, but stopped as darkness fell, he said. He made a shelter along the side of the road by leaning fir boughs against a rock face that protected them from the wind as temperatures dropped into the 30s.

“It actually kept us warm, considering I didn’t have a fire going,” he said.

McAlister said he doesn’t smoke, but he usually keeps lighters in his car. Friends who do smoke had borrowed them, he said.

Early on Wednesday, the family began trekking back to the van, reaching it at 8 a.m. They turned on the heater, tried to dry out their clothes, put on some DVDs and listened to the radio - and learned authorities were looking for them.

After spending Wednesday night in the van, they began walking out again on Thursday morning, tearing sheets of paper from a spiral notebook the older kids, ages 5 and 7, had left in the van and leaving them on the ground in wide spots of the road where they might be seen by helicopter crews.

That’s when the hunters found them, Jason McAlister said. McAlister formerly served as a volunteer firefighter for Cowlitz County, where he also worked search-and-rescue, and he said he was grateful for the efforts of everyone who had been looking for his family.

The hunters immediately recognized them because of heavy media coverage about the search, said Steve Shumate, chief criminal sheriff’s deputy in neighboring Grays Harbor County, where the family lives. They called 911, drove the family to a general store to meet medics and then led deputies to the family’s van.

It was an immense relief for authorities, who feared a less happy ending when the family failed to turn up Wednesday.

“We figured if they were going to walk out, that’s when it would have happened,” Shumate said.

The family’s home is in a rural area southwest of Seattle, about 20 miles north of the town of Montesano. They were reported missing Tuesday evening after no one showed up to meet the school bus bringing the older children home, Shumate said. Jason McAlister works as a ranch hand on the property, and Melissa McAlister works at a Walmart store.

“Hopefully they’ll learn some lessons about having a working cellphone with them and letting people know where they’re going,” Shumate said. “But they did an excellent job keeping their cool and staying dry and warm.”

McAlister said he probably won’t get a cellphone, because there’s no service where the family lives. But he said he learned one lesson.

Next time, he said, he’ll “take the truck instead of the family church rig.”