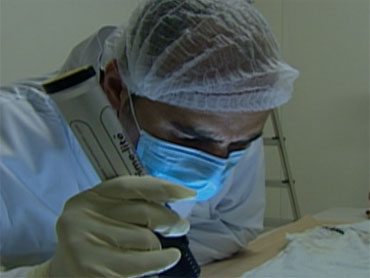 Saturday's episode of "48 Hours Mystery" featured the search for the killer in a 18-year-old murder case.

To find out who really killed 19-year-old college student Mischelle Lawless in 1992, Scott County, Mo., Sheriff Rick Walter hoped that advances in forensic science would reveal new clues. And he found the leading experts from an unusual source - an episode of "48 Hours Mystery."

"Well, I was watching your show, and there was a case that happened in Colorado that was very similar to this one," Walter tells "48 Hours" correspondent Erin Moriarty. "The next week, I said, 'OK, we have to get a hold of these people and find out, you know, if they can help us."

Those people worked in the Netherlands, at a place called "The Crime Farm." There, Sheriff Walter met forensic experts Richard and Selma Eikelenboom.

The Eikelenbooms have pioneered the use of what's called "touch" or "grip" DNA.

"I came here in hopes to find some DNA. We're lookin' to maybe get some skin cells off some of the clothing," the sheriff explained of the crime scene evidence he brought with him.

Richard Eikelenboom used special lights called "crime scopes" to find normally invisible spots of skin cells or other material. Meanwhile, an assistant snapped digital photos, which were transferred to a computer, where they could be examined close up.

Richard then snipped tiny bits of the fabric from the spots that showed up under the lights.

The "touch" DNA found on those samples would be tested against DNA from all the people on the sheriff's list of suspects.

Then they went to a small hill behind the farmhouse, a hill about as high as the embankment Lawless had run down, pursued by her killer, in 1992.

"She was grabbed somewhere and probably they beat her on the head," Richard explained.

Selma Eikelenboom stood in for Mischelle, while the sheriff and Richard played her possible attackers. They were trying to determine how Lawless got up the embankment and back to her car.

Said Selma, "We're going to try to reproduce the crime scene, that's one. And the second is, is it possible for one person to do this, or do you need two persons to do this?"

Sheriff Walter picked up Selma and staggered up the hill. Next, they tried the same thing with two people carrying the body.

The experiment only showed that Lawless, who weighed about 100 pounds, could have been carried up the embankment by either one, or two, people.

"It shows that after she was beaten on the head, she didn't walk any more. Somebody had to carry her up," Richard said.

The Dutch team's DNA tests found some interesting leads, but no conclusive evidence pointing to any one suspect. Still, Selma thinks the findings may help the sheriff.

"The ball is in his territory now," she says. "These DNA results, it can, it can become a leverage for the sheriff to get things starting up again. People might start talking after all that time."

Preview: What Happened to Gabby Petito?