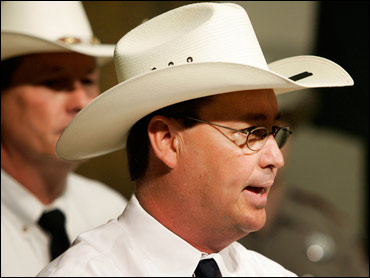 It was no secret that a polygamist sect that built a compound in the West Texas desert believed in marrying off underage girls to older men. And the sheriff had an informant for four years who was feeding him information about life inside the sect.

But authorities say their hands were tied until last week, when they finally obtained the legal grounds to move against the group.

The trigger for the raid was a hushed phone call from a terrified 16-year-old girl to a family-violence shelter to report that her 50-year-old husband had beaten and raped her. State troopers put into action the plan they had on the shelf to enter the 1,700-acre compound, and 416 children, most of them girls, were swept into state custody because of suspicions that they were being sexually and physically abused.

The state is now scrambling to find shelter for the women and children, reports CBS News correspondent Hari Sreenivasan.

On Thursday, state and local law enforcement authorities defended their decision to leave the sect alone for four years after it moved in.

"We are aware that this group is capable of" sexually abusing girls, Sheriff David Doran said. "But there again, this is the United States. We are going to respect them. We're not going to violate their civil rights until we get an outcry."

Doran said it was not until after the raid began that he learned that the sect was, in fact, marrying off underage girls at the compound and had a bed in its soaring limestone temple where the girls were required to immediately consummate their marriages. Also, investigators say a number of teenage girls there are pregnant.

Authorities in Texas suspected there would be trouble ever since members of the renegade Mormon splinter group - the Fundamentalist Church of Jesus Christ of Latter Day Saints - bought an exotic game ranch in Eldorado in 2004 and began building the ranch.

Warren Jeffs, the sect's prophet and spiritual leader at its longtime headquarters in the dusty, side-by-side towns of Hildale, Utah, and Colorado City, Ariz., was charged in 2005 and 2006 with forcing underage girls into marriages there. He was convicted in September in Utah of being an accomplice to rape and is serving up to life in prison.

According to tax documents, the ranch paid more than $400,000 in taxes in 2006, reports Sreenivasan. In addition to a cement plant and cheese factory, the hundreds of women and children could be another source of income.

Doran had been making occasional visits to the Eldorado compound - he even called to tell members of Jeffs' capture in 2006 - but he said he saw nothing to warrant a criminal investigation. Most of those milling around the compound would scatter when he and a Texas Ranger visited, he said.

"You can only press someone so far without having a criminal investigation going on," the sheriff said. "This group doesn't openly talk and they do not openly answer questions."

Doran said he had an informant who was "instrumental in teaching me the group's ways." But he declined to say whether the informant, a former sect member, was in Texas, or Utah or Arizona.

Barry Caver, a Texas Ranger who sometimes went with Doran to the compound, said a general welfare check wouldn't have produced much. "They would allow us on the property to the extent that we could talk to the main three or four people" only, Caver said.

Texas Attorney General Gregg Abbott said that despite other states' investigations into Jeffs and FLDS, Texas authorities had to wait until they had evidence of wrongdoing in this state to act. He said authorities handled the case properly.

"You cannot go in and bust in someone's house if there's not probable cause to do so," Abbott said.

Jonathan Turley, a George Washington University law professor who has written about polygamy, said even Jeffs' conviction was not enough to barge in on the sect in Eldorado.

"You cannot use stale evidence," Turley said. "They would need a contemporary statement or evidence at trial that an individual at the compound is practicing polygamy."

The man alleged to be the 16-year-old girl's husband, Dale Barlow, is a registered sex offender who pleaded no contest to having sex with a minor in Arizona.

"I do not know this girl that they keep asking about," he told Utah's Deseret Morning News on Wednesday. "And I have not been to Texas since I was a young man back in 1977."

Officials still have not identified the 16-year-old girl among the children and the 139 women being held at two sites in Texas.

"When you're dealing with a culture like this, they're taught from very early on that they don't answer questions to the point," Doran said. "All of that is certainly being sorted out right now."