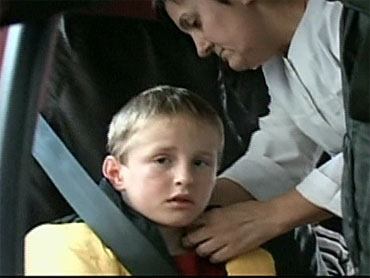 The president of Russia is calling it a "monstrous deed" - the decision by a Tennessee woman to send her adopted son back to his homeland, alone.

Now authorities in Shelbyville are investigating the actions of Torry and Nancy Hansen, the adoptive mother and grandmother of 7-year-old Artyom Savelyev.

On CBS' "The Early Show" this morning, Bedford County Sheriff Randall Boyce said his department is checking into what (if any) crime was committed.

"We'll have to go through this with kind of a fine tooth comb and see exactly what has been done here. Was this a poor judgment on her part, or has something illegal been done?"

Boyce also said it was not known if the adoption had been finalized, as court records on adoptions are sealed. "We'll have to get a court order to get in to see if the adoption was final," he told Rodriguez.

Boyce said what his investigators have been hearing so far indicates continued problems in the Hansen home: "What we're getting mostly is that he had violent issues and that they were more or less afraid of him, as far as trying to burn the house while they were asleep. I think he threatened some of these things. But it's still early. We're not exactly sure what the whole deal is."

"It Got to Be Where You Feared for Your Safety"

Nancy Hansen told The Associated Press that the motives of her daughter - a 33-year-old, unmarried nurse - were sincere.

The family was told the boy, whose Russian name is Artyom Savelyev, was healthy in September when he was brought from the town of Partizansk in Russia's Far East to his new home in the heart of Tennessee horse country. The skinny boy seemed happy, but the behavioral problems began soon after, Hansen said.

"The Russian orphanage officials completely lied to her because they wanted to get rid of him," she said.

Hansen chronicled a list of problems: hitting, screaming and spitting at his mother and threatening to kill family members. Hansen said his eruptions were often sparked when he was denied something he wanted, like toys or video games.

"He drew a picture of our house burning down and he'll tell anybody that he's going to burn our house down with us in it," she said. "It got to be where you feared for your safety. It was terrible."

Hansen said she thought that with their love, they could help him. "I was wrong," she said.

She said her daughter sought advice from psychologists but never had her adoptive son meet with one. They chose an English-language home study program, hoping to enroll him in traditional school in the fall. He would play with his cousin, Logan, at the family's property in Shelbyville, where there is a large backyard and a swingset.

In February, Hansen said, the family could take no more. The boy flew into a rage, snatched a 3-pound statue and tried to attack his aunt with it. Hansen said he was apparently upset after his aunt asked him to correct math problems on his school work.

Hansen bought the plane ticket, and the family arranged to pay a man in Russia $200 to take him from the airport and drop him off at the Russian education ministry. He arrived alone Thursday on a United Airlines flight from Washington.

When Artem arrived in Moscow, he was carrying a note that read in part:

"I am sorry to say that for the safety of my family, friends, and myself, … I no longer wish to parent this child. As he is a Russian national, I am returning him to your guardianship."

It went on to say that "he is violent and has severe psychopathic issues."

Sheriff Boyce said reaction to the news in his community and from around the country has been mixed.

"We've had phone calls from everywhere," he told "Early Show" anchor Maggie Rodriguez, "some people saying, you know, they had been involved in an incident like this and they didn't blame her for what they done, that they had been lied to by the adoption agency. Some said, you know, that we hope we prosecute her to the fullest of the law because they're losing their adoption rights to their child.

"It's a sad situation, and I guess there's not going to be a real good end to it one way or the other."

Also on "The Early Show," international adoption expert Joyce Sterkel of the Ranch For Kids Project, which helps "at risk" adopted kids, predominantly from Russia, said that she was not surprised that some parents are sympathetic to Torry Hansen's situation.

"I would say overwhelmingly, anyone who has parented a post-institutionalized child with difficulties is very sympathetic with this mother, even though they may not agree with the manner by which she handled it," Sterkel said.

Sterkel said while many expect "love heals," that a child's genetic foundation, including inter-uterine exposure to alcohol during a mother's pregnancy, cannot be loved away.

"It's a problem everywhere [that] pregnant women drink, and certainly in Russia that's the case. That can cause permanent organic brain damage."

Debbie Robinson, executive director of Miriam's Promise adoption agency in Nashville, told CBS News, "This child could've been placed with a qualified, licensed agency for placement services so that . . . somebody like us, or Catholic charities, could've found a family."

Sterkel said that adoptive parents who find themselves in a situation with a violent child often have few options.

"Saying the woman can go back to the adoption agency and turn the child over to them - no adoption agency will take a 7-year-old child with these problems," Sterkel said. "Social services probably will not help you. They will not take the child into foster care. You have the child, and once you've totally exhausted all your financial resources, then perhaps you can get some help. But as long as you have any financial resources, you won't get any help, you'll have to pay for it.

"I've seen parents spend tens of thousands of dollars on psychiatric facilities, elaborate treatments, medications, and all of it failed," she said.

Russian authorities have temporarily suspended adoptions by American families after the Tennessee mom sent the 7-year-old on a one-way flight back to his homeland alone.

Russian Foreign Minister Sergey Lavrov has called the boy's return "the last straw" after a string of foreign adoption failures, and officials in Moscow have called for a suspension of all U.S. adoptions in Russia - which totaled about 1,600 last year, according to the non-profit U.S. advocacy group the National Council For Adoption.

The Russian education ministry immediately suspended the license of the group involved in the adoption - the World Association for Children and Parents, a Renton, Washington-based agency - for the duration of an investigation.

"If Russia chooses to suspend these adoptions, these are Russian citizens - that is Russia's right," said State Department spokesman P.J. Crowley. "We would like to see these adoptions continue, but we understand the concern that Russia has, [and] we share that concern."