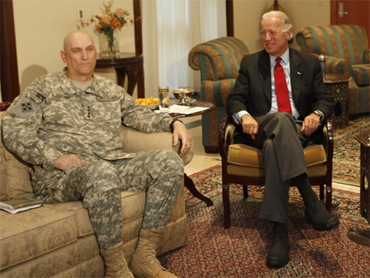 Four mortar shells landed in the Green Zone as Vice President Joe Biden arrived in Iraq Tuesday on a previously unannounced mission to help the country resolve its differences ahead of America's military withdrawal.

The shells were heard as they were fired from across the river on the east bank of the Tigris and at least one explosion was audible. There was no immediate word on any casualties or damage in the Green Zone or in any other areas of the capital.

The U.S. military said they had initial reports that "one round of indirect fire impacted near the International Zone, not in it." The International Zone is the official name for the Green Zone, the walled off area in the heart of Baghdad that is home to government offices, the U.S. and British embassies and parliament.

It was unclear where Biden was at the time of the attack. Warning sirens sounded in the protected zone shortly after the blast.

The three-day trip is Biden's third this year and is a chance for him to meet with the full range of Iraqi leaders both in Baghdad's central government and those of Iraq's self-governing Kurdish region, whose boundaries with the rest of the country have become a volatile fault line.

Biden said after a meeting with Gen. Ray Odierno, the top U.S. commander in Iraq, and U.S. Ambassador Christopher Hill that he was in Iraq to help "resolve outstanding political issues" so that "when we leave we have a more stable Iraq."

The U.S. is to withdraw all combat forces by the end of August 2010 and fully withdraw the remaining 50,000 troops by the end of 2011 as part of a security agreement signed between the two countries. There are now about 130,000 U.S. troops in Iraq.

Biden said that Odierno was optimistic that the readiness of Iraqi forces would allow the U.S. military to withdraw as planned.

The Iraqi government also plans to hold a national referendum on the agreement in conjunction with the January elections. If approved, the referendum would require all U.S. forces to leave within one year — well ahead of the existing plan to withdraw completely by the end of 2011.

Biden said of the referendum that "it is likely to happen." But he added that "there are a number of steps that still need to be taken."

Biden, who oversees Iraq policy for the Obama administration, made his last visit to the country on July 4 to spend the U.S. Independence Day with the troops. During that trip, he also met with his son, Beau, who is an Army captain serving in Iraq.

"I'm coming back to spend time with the Iraqi leadership with whom I might add I have been talking to on a basically weekly basis," Biden said.

Iraq's government hopes that on this visit the U.S. vice president will have suggestions on how to ease tension with Syria, which Iraq's prime minister has accused of harboring Saddam Hussein loyalists wanted in recent bombings that killed more than 100 people.

Iraqi leaders also plan to discuss their preparations for January's national elections and persistent violence in the country's north, said an Iraqi government official, speaking on condition of anonymity because he was not authorized to brief reporters.

"I think that a successful election is a necessary condition for these outstanding political issue to be resolved," Biden said.

As the number of bombings and other attacks declines elsewhere in Iraq, the north remains a battleground between Sunni Arab extremists and Iraqi and U.S. forces. Kurdish-Arab tension there also frequently flares into violence.

Biden was to hold talks Wednesday with Prime Minister Nouri al-Maliki and other officials that were expected to focus on Syria, January general elections and the violence in the north.

Al-Maliki has demanded that Syria hand over two suspects in the Aug. 19 truck bombings outside the foreign and finance ministries in Baghdad.

The United States has remained largely silent about al-Maliki's accusations, but has said Syria still facilitates the smuggling of foreign fighters into Iraq, and that former members of Saddam Hussein's outlawed Baath party lived in that country.

Odierno said after meeting with Biden that Syria "continues to allow the facilitation of foreign fighters."

"We still believe they continue the facilitation of some of these operations and we have to continue to press Syria to take action," Odierno said.

Biden's visit comes just before senior officials from Syria and Iraq, possibly the two foreign ministers, are to meet in Istanbul, Turkey, on Thursday in an effort to defuse the crisis. A Turkish-mediated meeting last week in Cairo failed to make any headway.

The accusations are widely seen as an attempt by al-Maliki, a Shiite, to shore up his position before the Jan. 16 elections after the increase in violence in recent months deeply hurt his security credentials.

The spat with Syria has also isolated him among Iraqi politicians, just weeks after al-Maliki's Shiite backers dumped him from their political grouping ahead of the elections.

During his last visit, Biden expressed concern that Arab-Kurdish tensions in northern Iraq might erupt into violence. At the time, all sides acknowledged the importance of moving forward on disputes over internal boundaries, the status of the oil-rich city of Kirkuk and integrating Sunni fighters who fought with the Americans against al Qaeda in Iraq into official security services.

There were signs of friction during the July visit, however, after Biden urged Iraqis to do more to bring the country's deeply divided factions together. He offered U.S. help, but warned that assistance may not be forthcoming if the country reverts to ethnic and sectarian violence.

That prompted a strong reply from the Iraqi government, which said the U.S. should not be intervening in an "internal issue."

Many Iraqis still identify Biden with his earlier advocacy of splitting up the country along sectarian lines even though the Obama administration rejects that position.