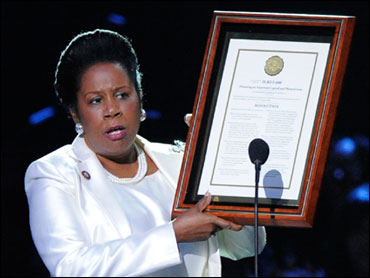 Rep. Sheila Jackson Lee, a Democrat from Texas, raised some eyebrows yesterday with remarks she made referring to "two Vietnams."

"I stand here asking us to do what we did not in do in Vietnam, was to recognize the valiant and outstanding service of our men and women," Jackson Lee said on the House floor yesterday, "and to understand that victory had been achieved."

Conservative bloggers like Meredith Jessup of Townhall.com lampooned Jackson Lee for her "plain idiotic" remarks. Blogger "Allahpundit" on Hot Air also burns the congresswoman, but he also points to congressional records from a decade earlier in which Jackson Lee proved to have a clear understanding of the history of the Vietnam war.

"No one would expect a member of her seniority to make that kind of statement and think it to be true," Thomas said, noting that Jackson Lee is a senior member of the House Foreign Affairs Committee.