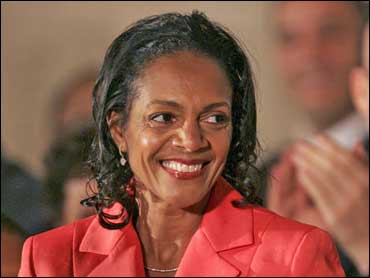 Mayor Sheila Dixon agreed to resign Wednesday as part of a deal with prosecutors, ending a three-year tenure that began with promise but unraveled amid embarrassing allegations that she stole from the poor.

Dixon, 56, was convicted last month of misappropriating about $500 in gift cards donated to the city for distribution to needy families during her time as City Council president. Had she not agreed to step down, she could have been thrown out of office.

On Wednesday, she entered an Alford plea to a charge of perjury, meaning she admits there is enough evidence to convict her on that charge but does not acknowledge guilt. It wasn't immediately clear how the plea will affect her embezzlement conviction. Her resignation is effective Feb. 4.

She did not face perjury charges at her trial last month, when she was acquitted on several charges but convicted of one count of fraudulent appropriation by a fiduciary, a misdemeanor.

She was facing a separate trial March 1 on perjury charges stemming from accusations she did not report gifts from Ronald H. Lipscomb, a developer with whom she had a brief romance.

Dixon has been mayor since January 2007, when she took over for fellow Democrat Martin O'Malley after he was elected governor. She was the first woman to hold the job, and she easily won election that fall to a full four-year term.

After her conviction, Dixon seemed to be fighting to stay in office. Her attorneys were scheduled to argue Wednesday that she should get a new trial.

The only hint that Dixon had changed course came in an impromptu interview with The Baltimore Sun published in Wednesday's editions. She spoke with regret about her romance with Lipscomb, who is at the center of the allegations against her.

Dixon's attorneys argued at her first trial that she believed the gift cards she used were personal gifts from Lipscomb. She was convicted of embezzling gift cards donated by another developer, Patrick Turner; her lawyers said Dixon believed those cards were also from Lipscomb.