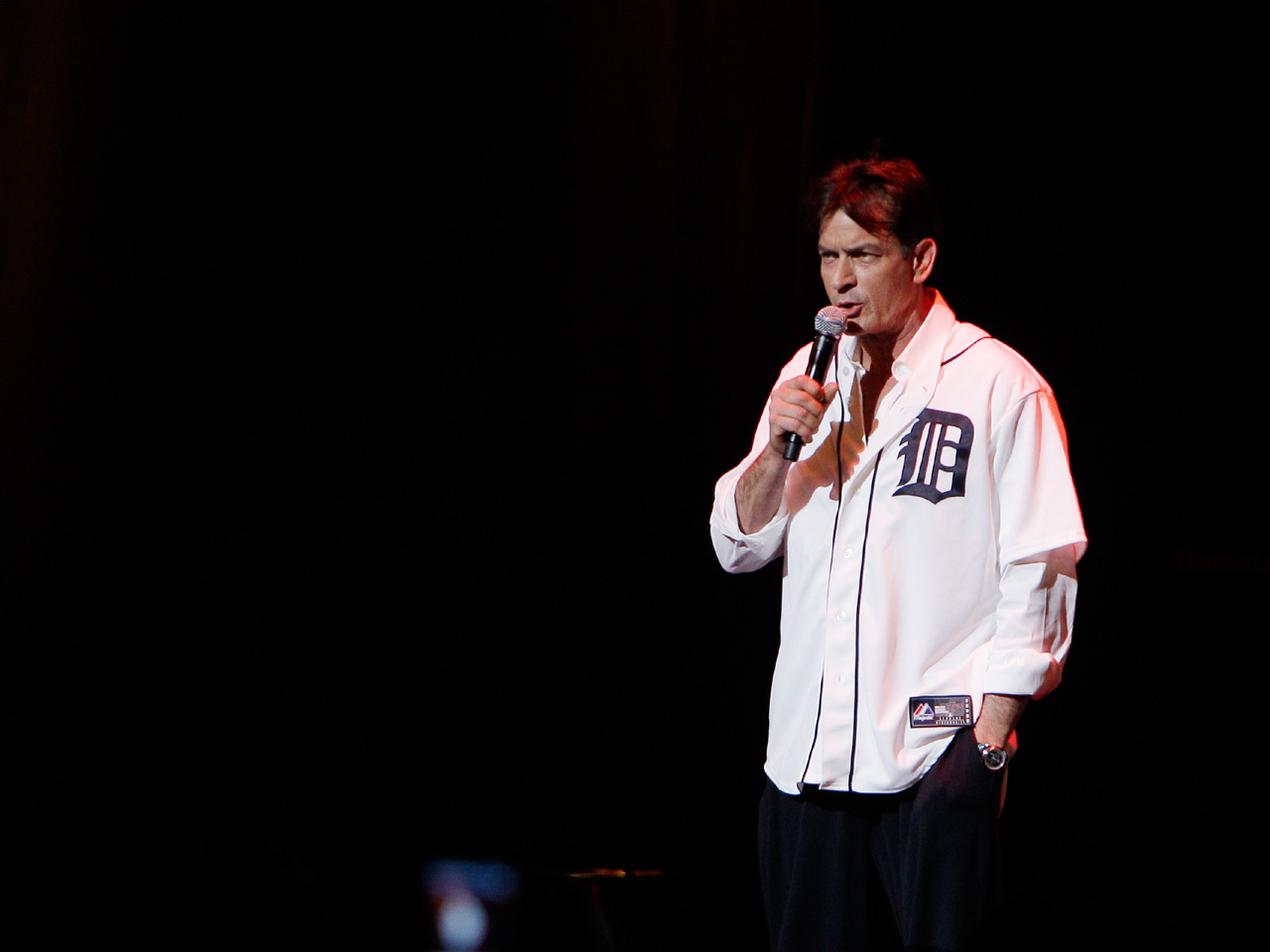 Now Sheen has apparently decided to add "bizarre" to a show that's already stupid and boring. And how will he do "bizarre"? Why, by toasting a dead man's ashes! Because THAT'S appropriate in a show that includes stories about smoking crack!

After an hour of frenetic conversation between Sheen and comedian Russell Peters during the actor's "My Violent Torpedo of Truth" show, Sheen called out to the audience for a woman whose husband had died two years ago to come onstage. Sheen said he read about her in a newspaper article.

The otherwise raucous audience in Toronto's Massey Hall fell silent as Wendy Newman took to the stage, clad all in black and carrying a vessel. Newman told the show-goers that her husband died of a heart attack and the only way she got through her difficult period was by watching DVDs of Sheen's former sitcom "Two and a Half Men."

When she learned the celebrity was coming to her home city, she snapped up tickets. She then posted a message on Sheen's Facebook page asking if she could bring her husband's ashes to the show and have Sheen raise a glass in honor of her husband of 19 years. And he did. Well, a glass of non-alcoholic cider, according to Peters, since Sheen has said he's put an end to his drinking or drug use.

"I think I can now send you off, Charlie Sheen is here now," said Newman after she gave a brief eulogy of her husband.

And then, strangely, the show abruptly ended, followed by an incomprehensible video of Snoop Dogg rapping, leaving the audience confused and unsure whether it was really over.

"What the hell was that?" said audience member Dale Manudoc, 25. "I didn't know what was going on during that whole show and then it just ends like that? What the hell?"

When Sheen first appeared on stage, he did without a cigarette. "Let's start with the fact that there's no ash tray," Sheen said. "This may be the first city I may not need a cigarette."

He then slyly slithered an electronic cigarette out from his pocket in an attempt to skirt Ontario's anti-smoking laws, which health officials had warned the chain-smoker about earlier. He's lit up frequently during his previous tour stops.

And then for the next hour, Sheen and host Peters, a popular Indian-Canadian comic, struggled to get a real dialogue going. An unplanned question-and-answer segment came off as stilted while audience couldn't resist shouting either words of adoration or random questions. The spectators got so disruptive, the pair opened up the show to the crowd in an attempt to allow them to ask their questions, but that also fell flat after several women lined up requesting only hugs and kisses.

In between the audience noise, the somewhat disjointed conversation was peppered with Sheen's random stories including an explanation of his "seven grams of rock" reference from his "20/20" interview.

"Seven-gram rocks. Who smokes seven-gram rocks?," he started with. "Basically, I had overstuffed my crack pipe. The thing broke and the rock fell out. I put it on a scale and it was four grams. I put it back (in the pipe) and figured some probably broke off so it would have been like three grams, so three plus four is a seven-gram rock. And did I finish it in one hit? F-ya."

That story prompted Peters to ask if Sheen's ever regretted anything he said.

"You look back and wonder why I say things. Sometimes I say things because they have bitchin' sounds," replied Sheen.

Peters carried the show through more back and forth, and then Sheen brought his "goddesses" -- the two women he lives with -- out by request from the audience. As they left the stage Sheen proclaimed "Do you f-ing blame me?"

Sheen's recent erratic behavior and battles with "Two and a Half Men" producer Chuck Lorre prompted Warner Bros. Television and CBS to fire him from the top-rated sitcom.

He's since filed a $100 million lawsuit against Warner Bros. and Lorre, hit the media circuit with bizarre, stream-of-consciousness musings and impulsively launched his "Torpedo of Truth" tour.

So it was anticipated that he would discuss the developments that ultimately led to his recent "Shenius" antics.

"It basically started because I told them, 'f-you'," he said. "They fired me then, but they knew I was high for eight years. Eight years. It was all about ratings and numbers and as soon as I spoke up, they said, 'you're exposing us."