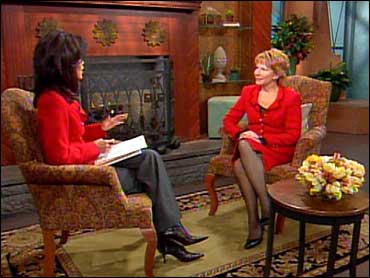 For a growing number of women, getting older is no longer seen as a curse. Many of them are unwilling to settle for the stereotypical roles of middle age.

And, according to best-selling author Gail Sheehy, women are increasingly excited about their second adulthood.

Sheehy writes about the transformation in her new book, "Sex and the Seasoned Woman: Pursuing the Passionate Life." She spoke with The Early Show's Julie Chen about the "seasoned woman."

"She's a woman who has been marinated in life experience," Sheehy said. "She's like a fine wine. She can be sweet, tart, bubbly, mellow. When you ask how old she is, I just give the answer that Vera gave to Auntie Mame: 'Somewhere between 40 and death.' "

The author traveled the country talking to over 400 seasoned women. She found that most of the women fit in one of five categories.

The first are the passionate.

"Well, these are sensual, independent, working women," she said. "And if they are married, they've found a way to revitalize, spice up their mid-life marriage because they worked at it. If they are single, they are dating, and often dating more than one man at a time and are often dating younger men."

Then there are the women Sheehy calls seekers.

"Seekers want what the passionates have, but they haven't quite found the key yet," she said. "Some of them are still bitter and unhappy from a previous relationship, so they aren't particularly appealing. Others are scared, and feel like they are too old, too fat, too scared. But, basically, they haven't quite caught on how to do it yet."

Then there are the WMDs: Women Married Dammit.

"Well, they are stuck. They are frustrated, angry," Sheehy said. "They may have a marriage that's been emotionally empty for a while but they would rather complain about it than figure out how to renew themselves."

Then there are the women who fall under the category of SQS: Status Quo.

"Status quo women are not necessarily unhappy, but they are resigned and they aren't doing anything to find a new dream or find a new source of spiritual refreshment or a new love," Sheehy said.

And then there are women who fall under the category of LLs: Lowered Libidos.

"Like many women after menopause, they find some diminishment in libido," said Sheehy. "But the LLs, unlike the others, aren't doing anything about it. There are new things women can do. These are women that just say, 'Been there, done that, not interested.' (They) just turned off."

No matter what category a woman falls into or can relate to, the book can help them figure out how to have a passionate life if they want it. But Sheehy says there's an arc of phases to getting there.

"It's different from 'Passages,' " she said. "Passages you go through anyway, stages of life. This is a conscious commitment and it really starts with the romantic renaissance. That may be spiced by a pilot-light lover who is a transitional figure who comes into a mid-life woman's life and reawakens her excitement about sex and love. He usually doesn't last. He's not a keeper, but she has to celebrate his role in her life because he makes her feel womanly again. Then she's ready for the next phase."

This romantic doesn't have to involve being in a relationship. It can be discovering a new passion, like a new language.

"It opens you to the imagination for the boldness to dream, which is essential," she said. "Women that I interviewed pretty much always thought, 'Wow. I don't have a new dream. Look how long I'm going to live. What am I going to do with it? Maybe I really like what I'm doing or my marriage, career, but I really need a passion.' Something that I do that time passes and I don't even know it. It's a new concept of yourself in the world.

"For instance, a woman on my street who is divorced, depressed. tried single dating, and was not getting anywhere. I heard her singing on the street where I live. And I said, 'What happened?' She said, 'I'm taking voice lessons.' She said, 'I always wanted to sing backup for Stevie Wonder. My husband always made fun of me. Here I am, 58, and I have this passionate crush on singing.' "

Learn to be Alone

Sheehy says it's very important that that you have to go through a phase of learning to be alone — "the deeper introspective stage."

"Most American women will spend more time alone than in any continuous marriage throughout the adult life cycle," she said. "You have to learn to go out and have dinner alone and enjoy it and not feel there's an empty chair. You might sit at a bar."

Another phase is soul seeking.

"Soul seeking is usually as you move into your 50s, late 50s and 60s. You want a deeper dimension and it's usually expressed through spiritual longing and spiritual growth," Sheehy said.

To read an excerpt of "Sex and the Seasoned Woman," click here.

For more on the Seasoned Woman's Network, click here.