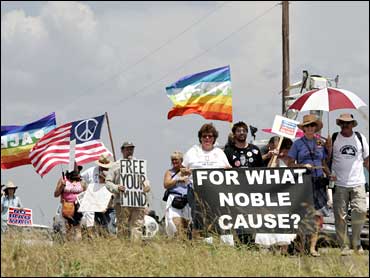 Under the blazing Texas sun, Sheehan and more than 50 demonstrators again marched a mile and a half toward Bush's ranch, stopping at a roadblock. As Secret Service agents stood silently, Sheehan held up her California driver's license and said she wanted to meet with the president.

"It doesn't say my new address, but I do live here now," said Sheehan, who lives in Berkeley, Calif., and recently bought land in Crawford for war protests. "My name is Cindy and Bush killed my son."

White House spokesman Tony Snow has said that neither Mr. Bush nor his staff plan to meet with Sheehan.

"I would advise her to bring water, Gatorade or both," Snow said when asked about Sheehan during a press briefing Friday. "Honestly, when you're talking about the kind of issues that we're talking about, Cindy Sheehan hasn't risen to the level of staff meetings at this point."

Earlier Sunday, about 50 protesters attended an interfaith service Sunday on the five acres that Gold Star Families for Peace recently bought with insurance money Sheehan received after her oldest son, Casey, died in Iraq in 2004.

The vacant land, with a field and tree groves, is near downtown, about seven miles from the ranch. Sheehan, who plans to donate the land for a park after the war is over, said she plans to register to vote and get a driver's license in Texas.

As Sheehan spoke, saying "our hearts are connected," regardless of people's races, countries or religions, a man disrupted the service with loud questions and shouts of, "This is unpatriotic!" before the protesters asked him to leave.

William McGlothlin of Marked Tree, Ark., said he was visiting his son in College Station and decided to try to see Mr. Bush's ranch, then stopped by the protesters' site because he had heard about them and was angry.

"I believe Bush is doing what he should be doing," McGlothlin said. "Freedom of speech is good until it gets out of whack."

Several Bush supporters also set up a tent Sunday in downtown Crawford, which they have done every time Sheehan has returned.

Sheehan said she expected more war opponents to arrive throughout the month. Their protest initially was to start Aug. 16, after the Veterans for Peace convention in Seattle, but she moved it up last week after learning that Mr. Bush would be in Crawford for only 10 days at the beginning of August.

A year ago, Sheehan and a few dozen anti-war demonstrators arrived in Crawford from the Veterans for Peace convention in Dallas and marched toward Bush's ranch, demanding to talk to the president about the war.

Two of Mr. Bush's top aides met with Sheehan, but she said she wouldn't leave until Bush himself talked to her, so she set up camp in ditches off a road a couple of miles from the ranch.

As her 26-day vigil swelled to several thousand people on weekends, and as locals complained of the noise, traffic and odor from portable toilets, a sympathetic landowner allowed the group to use his one-acre lot about a mile from the ranch.