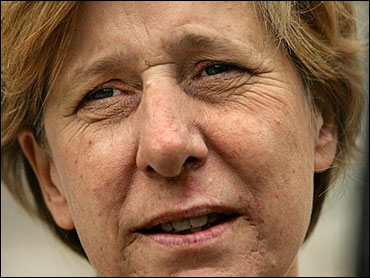 Cindy Sheehan, the mother of a fallen soldier in Iraq who reinvigorated the anti-war movement, was arrested and removed from the House gallery Tuesday night just before President Bush's State of the Union address, a police spokeswoman said.

Sheehan, who had been invited to attend the speech by Rep. Lynn Woolsey, D-Calif., was charged with demonstrating in the Capitol building, a misdemeanor, said Capitol Police Sgt. Kimberly Schneider. Sheehan was taken in handcuffs to police headquarters a few blocks away and her case was processed as Mr. Bush spoke.

Schneider said Sheehan had worn a T-shirt with an anti-war slogan to the speech and covered it up until she took her seat. Police warned her that such displays were not allowed, but she did not respond, the spokeswoman said.

Police handcuffed Sheehan and removed her from the gallery before President Bush arrived. Sheehan was to be released on her own recognizance, Schneider said.

CBS News reports Sheehan will be released on a "citation release," where a condition of her release is that she will appear in court in D.C.

"I'm proud that Cindy's my guest," Woolsey said in an interview before the speech. "She has made a difference in the debate to bring our troops home from Iraq."

Woolsey offered Sheehan a ticket to the speech — Gallery 5, seat 7, row A — earlier Tuesday while Sheehan was attending an "alternative state of the union" press conference by CODEPINK, a group pushing for an end to the Iraq war.

Sheehan was arrested in September with about 300 other anti-war activists in front of the White House after a weekend of protests against the war in Iraq. In August, she spent 26 days camped near the Bush ranch in Crawford, Texas, where the president was spending a working vacation.