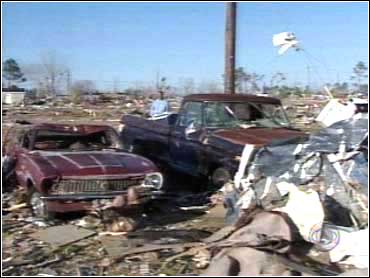 For Gaines Butler, it was a frightening and familiar sound. The sound his grandfather told him about 20 years ago when he was a child, reports CBS News Correspondent Byron Pitts

"It sounded like a freight train," Butler said with a smile. And then he started to cry.

"When that sound stopped I went outside," he added. "There in a ditch I found a dead baby. That baby was face down in the mud. All alone, curled up like he was asleep. That baby was dead. I ain't ever going to forget that."

Butler is one of the countless survivors of the deadliest tornadoes to hit Georgia in nearly fifty years.

The small town of Camilla - just north of the Florida state line - was hardest hit. Fourteen people from Camilla were killed - a mother and both her children, a World War II veteran and his wife, and on and on.

The tornadoes hit when most people were sound asleep. Most residents in the town lined with chicken plants and small farms get up early. Monday was simply supposed to be another work day.

"You had people who didn't have any chance," said Darlene Thomas. "They were in their bed sleeping and died in their beds because they didn't wake up in time."

Police suspect most people died like Lee Waters' neighbor. Waters says he found Fay Spoone wrapped in a blanket - still in her nightgown.

All told, at least 22 people were killed and more than 100 more injured.

Families of the injured and missing scrambled to see if loved ones were among the dozens sent to hospitals from Albany to Tallahassee, Fla.

More than 120 people swamped the hospital in the early morning. Mothers begged nurses to find their children. Hospital administrators in T-shirts and blue jeans tended to massive head wounds. Patients covered the halls, slumped on lobby chairs and packed into the chapel.

The hospital even lost its water connection and, for several terrifying minutes before a generator kicked in, all electricity.

"It was absolutely the worst thing I've ever seen," said Cara Tyson, th hospital's assistant director of nursing, who fought blinding rain and flying tree limbs to get to work. "It was a disaster - people were crying, children were hurt."

In Camilla, shelters were set up at churches and schools. An American Red Cross shelter offered cots, food, nursing and counseling for storm victims.

High wind and hail also caused scattered damage in much of Alabama, including widespread damage in Cullman, and knocked out power to an estimated 22,000 customers.

One or more tornadoes also destroyed at least four houses in the Florida Panhandle community of Sand Hills and damaged more than 40 others, officials said. In addition, lightning damaged three neighboring houses in Fort Walton Beach.

Two tornadoes destroyed at least a dozen structures in Arkansas and injured two people. Trees and power lines were down in parts of Mississippi and Tennessee.

As for Butler - he hopes to see a counselor. Or maybe he'll see a doctor - anyone who can help him stop crying or stop shaking.

As for the baby, he covered the child with a plastic bag. "What else could I do?" He asked. "That baby deserved better, but I lost everything I owned."
©2000 CBS Worldwide Inc. All Rights Reserved. This material may not be published, broadcast, rewritten, or redistributed. The Associated Press contributed to this report