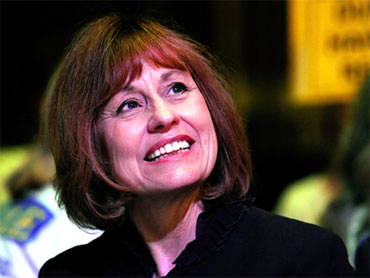 Republican Sharron Angle believes the clergy should be allowed to endorse candidates from the pulpit and opposes laws allowing gays to adopt children, according to a questionnaire by the Nevada Senate hopeful that was obtained by The Associated Press.

Angle, who is trying to unseat Senate Democratic leader Harry Reid, completed the four-page questionnaire for a conservative political action committee that has endorsed her candidacy.

The document provides a window into Angle's social and moral views, which would place her among Congress' most conservative members at a time of ongoing culture wars over gay rights, abortion and the boundaries between religion and government.

Among her positions, outlined in answers to 36 yes-or-no questions, Angle would oppose making sexual orientation a protected minority in civil rights laws. In a section on school prayer, she affirms that students and teachers should be able to talk openly about religion in schools, including the right to "publicly acknowledge the Creator."

The federal government bans churches from participating in political campaigns on behalf of candidates, but Angle said clergy should be able to express views on candidates from the pulpit.

Angle is a devout Southern Baptist, and she has talked openly about her faith and how it informs her politics. She describes her campaign as a spiritual calling, and accused Reid and Democrats in Washington of trying to "make government our God" by expanding entitlement programs.

Reid's campaign has called those comments "radical" and "frightening."

In the questionnaire, submitted to the Washington-based Government is not God political committee, Angle said she would vote in Congress to prohibit abortion "in all cases," and considers a fetus a person under the Constitution.

The Washington-based group's website says it supports candidates who oppose abortion rights and "stand firmly against the unbiblical welfare state that is destroying the spiritual and economic greatness of our nation."

Other Republican Senate candidates endorsed by the committee include California's Carly Fiorina, Marco Rubio in Florida, J.D. Hayworth in Arizona and Jane Norton of Colorado, according to its website.

Angle favors laws to restrict the production and sale of pornography, and believes that federal involvement in public schools should end. Also, she would oppose federal efforts to regulate private schools.

Angle's campaign has attracted support from conservative groups, including the Tea Party Express and the low-tax Club for Growth. She has been blaming Reid for Nevada's dismal economic condition - it leads the nation in joblessness and foreclosures - while Reid has sought to depict her as an extremist who would dismantle Social Security and Medicare.

Angle's views on church-state separation have been an issue in the race.

In a June interview on Nevada's KVBC's news interview program "Face to Face with Jon Ralston," Angle was asked about minutes from a 1995 legislative hearing in which she reportedly said the doctrine of church-state separation is unconstitutional. Asked on the program if the separation of church and state arises out of the Constitution, Angle answered "no." She said Thomas Jefferson is often misquoted and that he wanted to protect churches from being taken over by a state religion. The drafters of the Constitution "didn't mean that we couldn't bring our values to the political forum," she said.

Rev. Barry W. Lynn, executive director of Americans United for Separation of Church and State, a Washington-based advocacy group, said allowing clergy to make endorsements from the pulpit would turn houses of worship into "electoral machinery."

"When candidates are trying to get the endorsement of religious leaders, it tends to corrupt the political process and the integrity of the church," Lynn said. "I don't think churches should be cogs in a political machine, but that's what happens when you have to decide yes or no to a candidate's particular election."

Angle spokesman Jarrod Agen said the nation has a long history of clergy speaking out on matters of conscience and Angle "believes it is improper for the federal government to use the threat of revoking tax exempt status against churches and pastors."

Under the federal tax code, churches and other religious organizations could lose tax-exempt status if leaders make partisan comments at functions or in publications.

On adoptions, Angle believes children should have a relationship with a mother and a father, and she believes education should be managed at the local level "not by bureaucrats in Washington," he added.