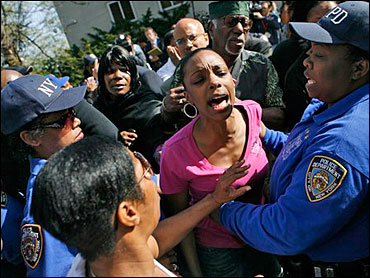 An upcoming day of civil disobedience to protest the Sean Bell verdict will hopefully end with participants arrested while on their knees praying, the Rev. Al Sharpton said Saturday.

"Where we go from there is anybody's guess," Rachel Noerdlinger, Sharpton's spokeswoman, said later, adding that wherever protesters end up, "they'll be arrested praying."

Sharpton said the protesters would fan out from their meeting points, but he would not disclose their destinations.

He has promised to "close this city down" to protest the April 25 acquittals of three police detectives in the 50-shot barrage that killed the unarmed Bell on his wedding day in 2006. Two friends were wounded.

Sharpton was joined Saturday at his Harlem headquarters by Bell's fiancee, Nicole Paultre Bell, and Trent Benefield, one of the wounded men.

Paultre Bell will participate in Wednesday's protest and any other action "'til justice is done," she told several hundred people gathered at Sharpton's National Action Network headquarters in Harlem.

He said that the planned pray-in is only the start of whatever actions are necessary to oppose the verdict.

"It's going to be a long struggle, but the race isn't given to the swift or the strong, but to those who endure," Sharpton said.