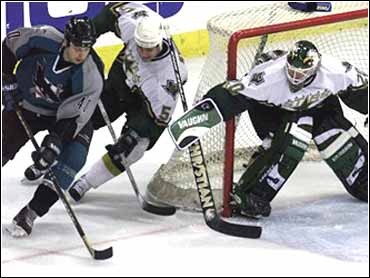 After allowing 17 shots in the first period, the last thing the San Jose Sharks needed was to go a man down for five minutes because Mike Ricci, their top penalty killer, was ejected.

The ensuing power play indeed turned out to be the game's turning point, yet surprisingly it went in San Jose's favor.

Evgeni Nabokov's solid goaltending and outstanding work by the penalty-killing unit led to a 2-1 victory over the Dallas Stars on Friday night, keeping the Sharks atop the Pacific Division.

"Killing penalties like that takes teamwork and I needed to make some great saves," said Nabokov, who faced just two shots on the five-minute major and made 28 saves overall. "That's why you're a team, to help each other."

The Stars started the game with what captain Derian Hatcher called their best period of the season, a 17-shot attack filled with intense, crisp play by all four lines. The defense was strong, too, holding the Sharks to seven shots, all swatted away by goalie Ed Belfour.

Then, less than two minutes into the second period, Ricci received a five-minute major match penalty and game misconduct for intent to injure on a head butt that missed Sergei Zubov.

The Stars weren't the same after they failed to capitalize. Dallas got just nine more shots and were shut out on 11 overall minutes with the man advantage.

"It deflates the guys who are not on the power play and it takes momentum from the team when you don't score,"/B> Hatcher said.

Ricci said he leaned his head toward Zubov to try baiting the Stars defenseman into a penalty while skating far behind the puck.

"If the intent was to injure, I would've hit him," Ricci said. "I should have just skated away."

Instead, he went to the locker room. And prayed.

"My prayers were answered," he said.

San Jose won its second straight since a five-game skid following an injury to leading scorer Vincent Damphousse. The Sharks opened a three-point lead over the Stars, who could've gone up by one with a victory.

Dallas was ahead earlier this week, but have lost two in a row and three of four. The teams meet again Thursday in San Jose.

Beating Dallas is a confidence-booster for the Sharks, who were 0-1-1 against the team that has eliminated them from the playoffs two of the last three years. San Jose is 5-0 against the rest of the division.

Belfour continued to struggle, losing for the seventh time in 15 starts. He allowed a 45-foot goal to Gary Suter midway through the second period, then one to Marco Sturm in the third period. Sturm's shot hit the webbing of Belfour's glove, popped out and trickled into the net.

"It's unfortunate the puck jumped off of my glove like that," said Belfour, who was using a new one. "I thought it was in my glove."

Nabokov, who won for the 25th time in 41 starts, missed his fourth shutout by 6:26 as Jamie Wright scored on a rebound.

The rookie goalie came back strong, roaming far out of the crease to block a blast by Joe Nieuwendyk and a follow-up attempt by Brett Hull with just over two minutes to go.

"He's big and he cuts down the angles," Dallas' Mike Modano said. "He's been a good story for San Jose this year."

The Stars were without six regulars, four of whom have new or re-aggravated injuries. Their absence was expected to hurt Dallas' penalty kill, yet it was the Stars' power play that looked out of whack.

Lots of things are going wrong for the two-time Western Conference champs. Dallas is no longer able to hold its own against elite teams, going 1-9-1 since Nov. 17 against Detroit, New Jersey, Phoenix, Colorado, San Jose and Los Angeles.