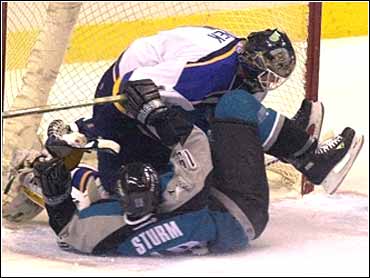 Brad Stuart scored 1:51 into overtime to lead the San Jose Sharks to a 4-3 victory over the St. Louis Blues on Saturday night.

Daniel Corso, Jamal Mayers and Scott Young scored for St. Louis, which had its home winning streak stopped at three. It was also the first time the Blues lost in 30 games when they took a lead into the third period.

The Blues could not clear the puck from their own zone and Stuart blasted a shot past St. Louis goaltender Roman Turek for the win. San Jose was able to salvage a win even though the Sharks were outshot 31-14.

Blues defenseman Al MacInnis left in the third period after taking a high stick from San Jose's Scott Hannan. MacInnis received stitches to his left eyelid, and did not return.

Suter's power-play goal at 10:04 of the first gave San Jose a 1-0 lead. The sot deflected off St. Louis forward Craig Conroy and went into the net.

Corso tied it with a power-play goal at 19:09 of the first. A shot by MacInnis got behind Sharks goalie Steve Shields, and Corso jammed it into the net for his fourth of the season.

San Jose came right back and tied it at 9:57 of the period when Matteau got behind the Blues defense, took a pass from Marco Sturm and beat Turek.