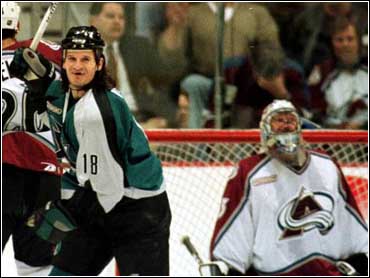 With only two goals in his previous 11 games, Colorado's Milan Hejduk was overdue.

He scored twice Thursday night with a nifty move around goalie Steve Shields and a hard shot from the slot, helping the Avalanche rally to a 3-3 tie with the San Jose Sharks.

"You could call it a slump," Colorado coach Bob Hartley said, "but his chances were still there and you knew that with his talent, sooner or later he was going to put one in. He scored a big one, and you could tell that his confidence is back."

Colorado came back from a 3-1 deficit with two goals just 45 seconds apart early in the third period to extend its unbeaten streak at home to 12 games (9-0-3).

The Avalanche, playing without star forward Peter Forsberg who is sidelined with a concussion suffered on Tuesday night, overcame the third-period deficit on goals by Greg de Vries and Hejduk.

The Sharks had five shots on goal in the overtime session compared to Colorado's one. Roy twice stopped Owen Nolan in the extra period, and the Sharks withstood a 3-on-1 Colorado rush when defenseman Brad Stuart broke up Joe Sakic's pas intended for Martin Skoula on the left wing.

With the tie, the Sharks snapped a five-game losing streak in their final game before the All-Star break.

"We lost our previous two games in overtime, and we've played three overtime games in a row now," Sharks coach Darryl Sutter said. "The reason we're playing so many overtimes is we're having trouble scoring goals.

"We scored the two goals early. To think that they (Avalanche) were going to disappear is dead wrong. They haven't lost here in what, 12 games? We had a good first period, and they had a good third period, and you've got to expect that."

Ricci, a former Avalanche player acquired by the Sharks on Nov. 20, 1997, scored twice in the opening period.

The Sharks ended their scoreless streak at 89 minutes, 55 seconds with a goal just 23 seconds into the game when Colorado's Sandis Ozolinsh circled behind the net and attempted to clear a pass that deflected off Ricci into the goal. The goal also ended San Jose's scoreless streak in Denver at 154 minutes, 57 seconds.

Penalties against de Vries and Adam Foote gave San Jose a 5-on-3 advantage for 1:03, and Ricci scored again, deflecting a shot from the slot by Gary Suter for a power-play goal, his 15th of the season, at 6:48.

"One goal was a tip and on the other I'm sure he (Roy) didn't know the puck was going to get to me," Ricci said. "I got lucky with a couple."

Hejduk made it 2-1 late in the second period. Hejduk took a pass from Sakic in the left circle, drew Shields out of the crease and tucked the puck behind Shields into an open net at 17:34. Sakic extended his points streak to 15 games.

"Sakic made the great pass to get me the puck," Hejduk said. "I went to the goalie from the left side, tried to move to the middle and cut it back. There was more room than I thought because he was so far out of his net."

Niklas Sundstrom put San Jose ahead 3-1 early at 1:37 of the third period, but Colorado countered with two quick goals.

De Vries scored his first goal in 77 games at 3:44, deflecting Stephane Yelle's shot out of the air with his stick.

At 4:29, the suddenly energized Avalanche scored again when Hejduk stole the puck from Jeff Friesen and beat Shields from the slot for his 24th goal.

Rostopped Nolan on a breakaway with 1:23 left in regulation.

"You want to make those saves when the team has come back from 3-1 to tie it," Roy said. "I thought we had more momentum in the third period."