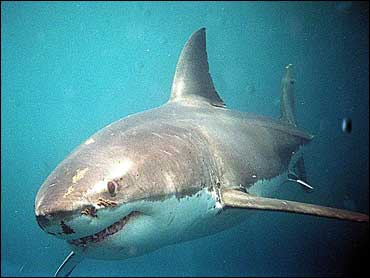 Authorities said Friday they would kill the shark that tore apart a young surfer near a popular south Australian beach as his friends reportedly tried to save him by beating the animal with oars.

Although great whites are a protected species, Foley said the government would destroy the shark because it was a threat to swimmers.

"Any large shark, in close proximity to the beaches of our state, particularly the city of Adelaide, should be destroyed," Foley told reporters. "Officers are authorized to take whatever necessary action to ensure the destruction of a shark posing risk."

But the victim's father said he opposed the move.

"We don't advocate the indiscriminate killing of any shark," Philip Peterson said after visiting the beach where his son died.

Rescuers on Friday found what they believed to be human remains in waters close to where Peterson was killed, South Australia's Sea Rescue Squadron spokesman Fraser Bell said.

The teen-ager was attacked after he fell from his surf board while it was being towed behind a motor boat Thursday at West Beach, close to Adelaide. His friends pounded the shark with oars in an attempt to make it release Peterson, The Australian newspaper reported, citing witnesses.

The shark ripped the young man apart, Bell told reporters. "Apparently it tore him in half," he said. Two 16-year-old boys who witnessed the attack were receiving medical treatment for shock.

Peterson's parents, Philip and Leonie, visited the beach Friday with other friends and family.

"Nick was a passionate and experienced water man who believed in the values of respect and encouragement of others," his father said.

"He was a keen surfer but his love didn't stop at his zest for the ocean," he added. "He was a brother and protector to others and a very positive influence in our lives."

Despite the attack, West Beach was not closed, though police warned swimmers to stay within limits patrolled by life guards.

Several people visited the beach early Friday, media reported, but very few ventured into the water despite warm weather and calm seas perfect for swimming. A group of Peterson's friends held hands as they walked across the sand.

The fatal shark attack was the third in recent months in Australian waters.

A 38-year-old man was killed by a shark while spearing fish on the Great Barrier Reef off northeast Australia on Saturday.

And two sharks attacked and killed a 29-year-old surfer off the Australian west coast in July. Experts said at the time said that sharks were not known to hunt in pairs.

Keeper of Australia's national Shark Attack File and operations manager at Sydney's Taronga Zoo, John West, said attacks would always occur in Australian waters and that the number of attacks did not appear to be on the rise.

He said it was uncommon for the victim to be eaten.

"Being killed and then eaten by a shark is not common at all. Most shark attacks relate to a single bite and a majority of them are let go," West told Australian Broadcasting Corp. radio.