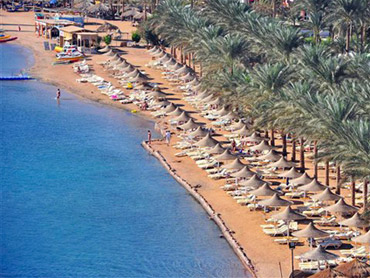 Director of Sinai Conservation Mohammed Salem said the shark attacked two Russians swimming in the Ras Nasrani area near the famed Sharm el-Sheikh resort in the Sinai Peninsula and bit their arms off.

The same shark may also have been involved in an attack on another pair of Russians on Tuesday swimming close to the resort beach, he added.

The shark badly injured a middle-aged woman's legs and back and bit off her hand. She had a heart attack and had to be resucitated at the hospital.

The second victim, a 70-year-old woman was found with her right hand and left leg torn off.

Diving instructor Hassan Salem (no related to Mohammed Salem) said he was on a dive at the same time of the attack and was circled by the same shark before it went after the couple.

"I was able to scare the shark away by blowing bubbles in its face, but then saw it swim to a woman and bite her legs," he told The Associated Press.

Salem said the water turned red with the blood from the attack, and he rushed to take the diver he was training out of the water.

All four victims were flown to Cairo for medical treatment and were in critical condition.

A spokesman for the Russian embassy in Cairo confirmed that two Russians were attacked Tuesday, but he was only aware of a single Ukranian involved in a shark attack the following day. The discrepancy could not be immediately explained.

Mohammed Salem said coast guard authorities were hunting for the shark and have issued a warning for swimmers to stay out of the water in Sharm el-Sheikh, a famed scuba diving destination.

He said Egypt sees one to two fatal shark attacks a year and they increase as the number of tourists and swimmers in the water rises.