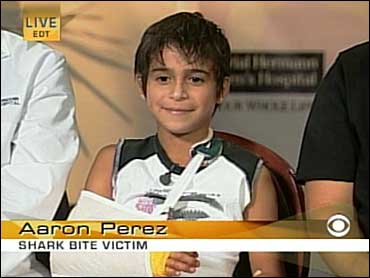 An 11-year-old shark attack survivor is heading home Monday, after spending a week in a Houston hospital.

Last Sunday, a bull shark locked its jaws on Aaron Perez' forearm as he was trout fishing in waist-deep water with his father and a family friend at Bryan Beach in Texas.

Recounting the attack to Early Show co-anchor Harry Smith , Aaron says he turned to tell his father he caught a fish when the shark bit him. "I started yelling to my dad, and my dad and his friend ran over and started hitting the shark and picked me up and we ran ashore."

The shark bit him twice on the right leg and clamped onto his arm.

Aaron's father, Blas, recounts, "As soon as this happened, I started running towards Aaron, and I lost all composure and started swinging on the shark." Family friend Don Townes "grabbed Aaron and the shark took off." With adrenaline pumping, they ran out of the water into their truck and drove toward the Freeport fire station, three miles away.

A nearby police officer got in the truck to give Blas directions. "He saw that I was driving very erratic and so he told me to stop the truck, and he threw me out, threw me in the back and jumped in the driver's seat," Blas says. "He didn't drive any better."

The boy was taken to the Freeport fire station, which is about an hour and a half drive from Houston. Emergency officials arranged for him to be flown by helicopter to Memorial Hermann Children's Hospital.

Aaron's forearm suffered extensive injury - his hand was barely held by the crushed bones. Fortunately, his recovery is ahead of schedule.

"He can move his fingers some," says microsurgeon Dr. Emmanuel Melissinos. "He has the right attitude and I expect him to do very well."

Aaron says the thing he is looking forward to most when he gets home is "eating" - getting away from the hospital food.