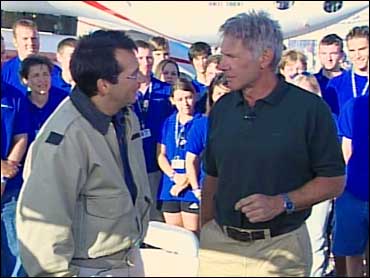 A passion for flying is what Steve Fossett and Harrison Ford have in common, and if you share it, you probably know why they are at the Experimental Aircraft Association's weeklong AirVenture fly-in and convention, in Oshkosh, Wis.

Billed as the world's largest gathering of recreational aviators, the convention at Wittman Regional Airport attracts more than 10,000 airplanes - many of them homemade aircraft - and nearly 250,000 aviation enthusiasts from around the world.

On Thursday, The Early Show's Dave Price got to see the Virgin Atlantic GlobalFlyer, which flew for 67 straight hours and 23,000 miles around the world without stopping or refueling.

Fosset, who became the first pilot to accomplish the feat alone, tells Price the record-setting jet plane has not flown to its capacity, and the idea of going around the world one more time, is very enticing.

He says, "Although I made it around the world and did the speed record around the world, now I'd like to make the longest flight that has ever been made in an airplane. This should be done before we put it in a museum."

He plans to do that "January or February of next year," he says. When asked why he seeks new challenges instead of relaxing and retiring, Fossett says, "I enjoy this and it's fascinating. I think it goes back to everybody's love of flying. I love to fly. The whole idea of flying over oceans and continents, it's really stimulating."

Harrison Ford grew up with a love of flying, but it wasn't until the Hollywood star was 55 that he got to pilot a plane.

"I always had the dream," he says. "I was in college and I took a couple of lessons then. It was about $11 an hour to go with an instructor pilot, and I couldn't afford it. Years later ,I was flying around as a passenger. I'd go up front and watch what the guys were doing. I got fascinated by it again. At the age of, I think, about 55, I decided I would give it a whack. I didn't know if I would be able to learn enough to do it. But it has been a wonderful experience for me. I've had a great, great time."

And he is encouraging young people to fly as the chairman of the EAA Young Eagles program.

"The idea is to give young people, ages 8 through 17, a ride in a general aviation airplane," Ford explain. "That gives them a chance to experience the freedom and responsibilities that attend to flying an airplane."

According to Tom Poberezny, EAA president and AirVenture chairman, more than 500 educational forums, seminars and workshops are planned at the convention this week. Also, 700 exhibitors will showcase their aviation goods.

Though Price didn't get a chance to fly, he did have the opportunity to be in the B-17 Flying Fortress.

Sure to attract some gawkers, SpaceShipOne is the world's first successful civilian-built rocket plane. It and its carrier aircraft, the White Knight, are making their only planned public appearance together at AirVenture. Then, the rocket plane goes on permanent display at the National Air and Space Museum in Washington, D.C.

SpaceShipOne made a successful test flight to the outer edge of Earth's atmosphere over California last summer and eventually flew two missions and won a $10 million prize for its history-making feat - civilians building and flying a spacecraft to a height of 62 miles twice in a two-week period.

Loaded onto White Knight, its mother ship for launching into space, SpaceShipOne landed at the show Monday afternoon and it will be displayed through Sunday, the show's final day.

Other planes expected to garner attention at the fly-in include:

Other aviation legends attending are: