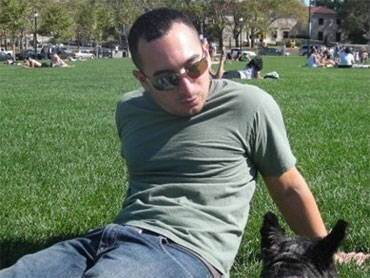 A Boston University graduate student is being taken to court by a powerful coalition of record companies for downloading music from the Internet. If he loses, he could be forced to cough up $1 million in fines for downloading dozens of songs.

It already has to a Minnesota mom, who dared to battle the Recording Industry Association of America (RIAA) and lost. Last month, a federal jury ordered her to pay $1.9 million for illegally downloading 24 songs.

And you thought a $16 CD was expensive.

But Joel Tenenbaum, a Boston resident from Providence, R.I., is choosing to fight back. And he's armed with storied Harvard Law Professor, Charles Nesson, who the Boston Globe describes as "one of the most brilliant, if eccentric, professors at Harvard Law School."

Tenenbaum is also using the Internet. His webpage tells his side of the story and a Facebook group, Joel Fights Back Against RIAA, already has over 3000 members.

According to Tenenbaum's site, in 2003 the graduate student tried to make peace with the RIAA who demanded $3,500 for his file sharing shenanigans. Tenenbaum says he offered them $500, an offer they refused, but took no further action. Then four years later, the RIAA pulled Tenenbaum back into court. The student claims he offered the RIAA $5,000 to get off his back. Not good enough. Now they wanted $10,500.

Joel didn't bite. Instead he has decided to do what only one other person has done…defy the RIAA and meet them in court. Remember the only woman to do this, Jamie Thomas-Rasset, got beat down to the tune of almost $2 million. A loss in court is going to hurt Joel a lot worse than student loans.

Already the trial has had a few wrinkles. During jury selection, several potential jurors were tossed because they too had illegally downloaded music on the Internet.

During opening statements on Tuesday, Nesson said his client started downloading music as a teenager, taking advantage of file-sharing networks such as Kazaa that make it possible for computer users to share digital files with a network of strangers.

"He was a kid who did what kids do and loved technology and loved music," Nesson said in opening statements.

Nesson said the recording companies enjoyed decades of success but were slow to adapt to the advancements of the Internet.

"The Internet was not Joel's fault," Nesson said. "The Internet sweeps in like the way the automobile swept into the buggy industry."

Tenenbaum is accused of illegally sharing 30 songs from bands such as Green and Aerosmith, though the recording companies say he distributed
many more than that.

Reynolds said Tenenbaum used a computer in his parents' house in Providence and then at Goucher College in Baltimore, where he was a student, to download and distribute digital files. He was flagged in August 2004 by MediaSentry, a private investigation company that was used by the recording industry to identify illegal song distribution.

Reynolds said that Tenenbaum continued distributing songs even after he had been confronted about it and that the defendant blamed his sister, friends and a foster child who had lived at the house.

"This defendant knew what he was doing was wrong at each step of the way," Reynolds said.

Nesson urged the jury to "find the minimum number of infringements" by Tenenbaum, if any at all.

The recording companies involved in the case are subsidiaries of Universal Music Group, Warner Music Group Corp. and Sony Corp.