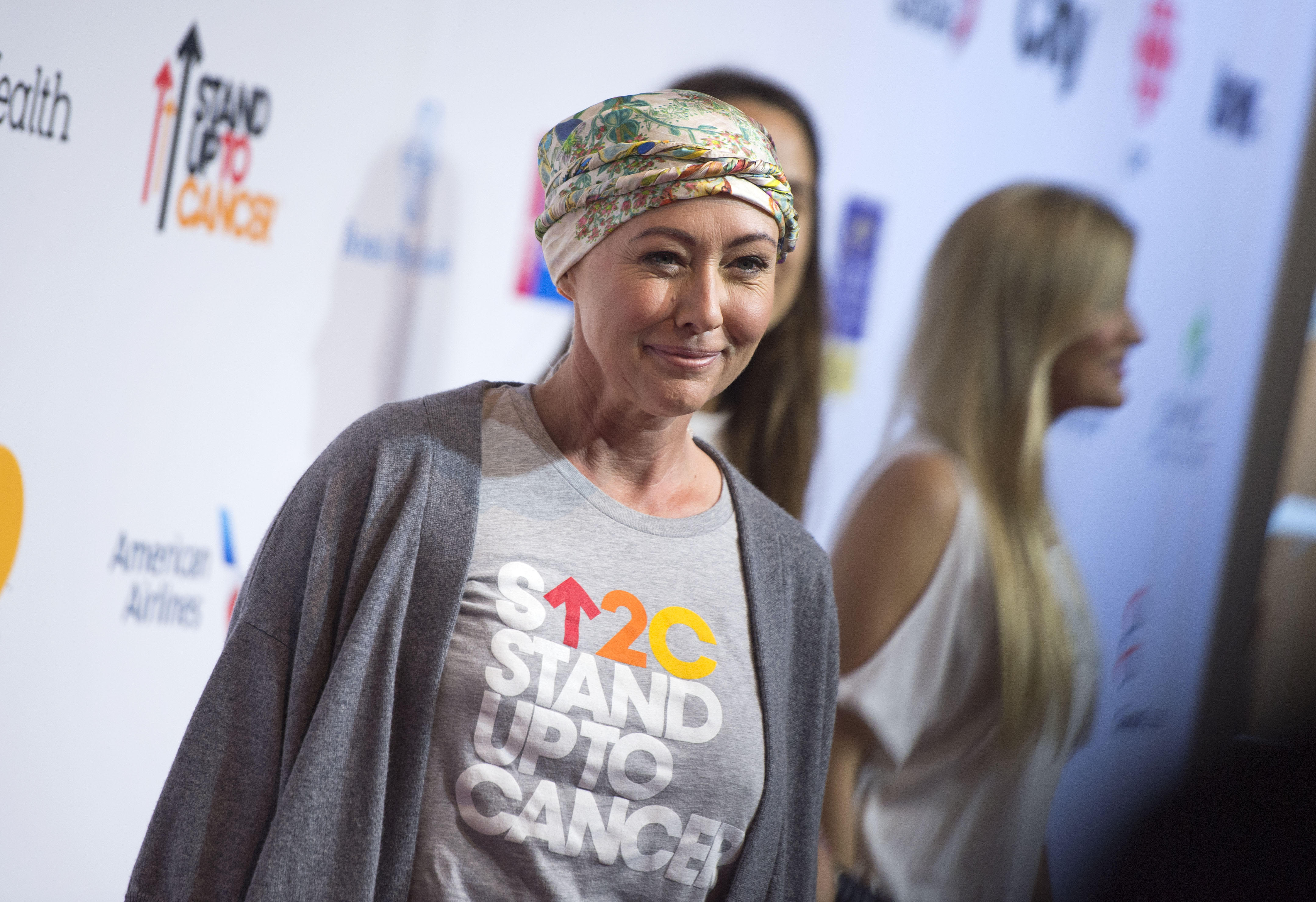 In what might be the most epic TV reunion ever, “90210” stars Jennie Garth (Kelly), Luke Perry (Dylan) Jason Priestley (Brandon) and Tori Spelling (Donna) got together for REWindCon in Bloomingdale, Illinois over the weekend.

Sixteen years after the Fox show’s final episode, the ‘80s and ‘90s-focused fan convention saw the actors unite for photos, panels and meet-and-greets. And, while one of their most memorable co-stars, Shannen Doherty, could not attend due to breast cancer treatments, the group made her presence felt with heartfelt tributes.

“None of us are up here today without Shannen,” said Perry, who played Doherty’s on-screen boyfriend, Dylan, for years. “She’s been through a lot. She’s not doing well right now, but sometimes her contributions are minimized.”

“She’s been thrown under the bus,” the “Riverdale” star continued. “I’ve been accused of driving it. But she’s a very big part of the success of this show. She taught me a lot. I’m glad she was my scene partner. She was great at what she did in the character with me.”

Perry even named Brenda and Dylan as his favorite couple from the iconic series. As for his other TV girlfriend, Kelly, played by Garth, the hunk compared her to Florence Henderson.

Garth also paid tribute to Doherty, posting the words “Fight like a Brenda” on Instagram, alongside a moving post about her friend and former co-star’s strength.

“To my soul sister @theshando strongest lady i’ve ever known. then and now. i used to be threatened by your spirit, now i’m in awe of it,” Garth wrote. “You’ve taught me a lot about speaking my mind and not being afraid of my power. i’m so grateful that young me got to be friends with you. but especially ‘old’ me! the best is yet to come on this crazy journey!! love you! #fightlikeagirl #fightlikebrenda #aries.”

Cateris, now President of SAG-AFTRA, got into the event’s throwback spirit by kicking off the weekend posing with a bunch of ’90s boy banders, including members of O-Town, *NSYNC and 98 Degrees.

Dorough was thrilled to “complete the 90210 pic” with Jason Priestley and Luke Perry before the convention wrapped up on Sunday.

While fellow “90210” hunks Brian Austin Green (David) and Ian Ziering (Steve) or beloved Peach Pit owner Joe E. Tata (Nat) didn’t make it to the convention, the close clan made sure to get Ziering in on the action via a video call.

“We have #90210 all reunions all the time, even digitally,” Ziering shared with a screenshot of the call. “❤ U like family @torispelling @jenniegarth @Gabriellecarteris @jason_priestley.”

See Priestley speak out about Doherty’s cancer battle in the video below.