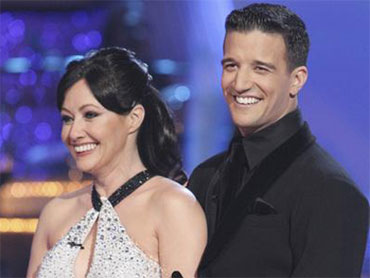 After two weeks on "Dancing With the Stars," Shannen Doherty is leaving the ballroom.

The actress was the first celebrity eliminated from the new season of the hit ABC show. She and professional partner Mark Ballas were axed during Tuesday's episode.

"Dancing isn't really my thing," she said after learning her fate. "I did it for my dad."

The 38-year-old "Charmed" and "90210" star said on last week's season premiere that she joined the "Dancing" cast to honor her father, a big fan of the show who recently suffered a stroke. He sat in the audience, watching his daughter perform.

"To see my dad's face light up the way that it did and how proud he was of me just filled me with this kind of amazing emotion of thankfulness," Doherty said Tuesday. "I call that a success."

She said her elimination may have been fate, as Ballas hurt his knee during rehearsals and was using a crutch during Tuesday's episode.

"I pulled the muscle off the bone so I'll be out for six weeks," he said.

The judges seemed to appreciate the couple's two dances, calling their jive "energetic" and their Viennese waltz "ambitious." But fans failed to keep them afloat. Judges' scores are combined with viewer votes to determine which celebrity is eliminated each week.

Viewer votes saved the lowest-scoring contestant, astronaut Buzz Aldrin, who earned 14 points out of 30 for his cha-cha last week and 12 points for his foxtrot on Monday's episode.