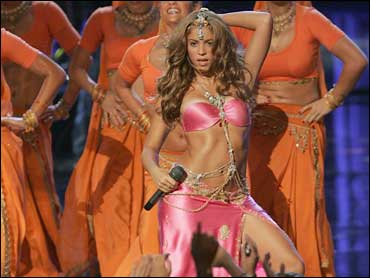 Shakira may get high grades in singing and swiveling her hips, but what about ancient Western history?

For the past month, the Colombian pop star has been taking a class at the University of California, Los Angeles, called "Introduction to Western Civilization: Ancient Civilizations from Prehistory to Circa A.D. 843."

"She went when she finished her tour for the summer," Shakira's manager Fifi Kurzman told The Associated Press.

For years the 30-year-old has studied on her own, also taking tutorials on the history and languages of the countries she visits, Kurzman said.

The singer, known for last year's "Hips Don't Lie" and other hits, released her first album at age 14 and later took time off to finish high school.

She decided to take a musical rest this summer following her worldwide "Oral Fixation" tour to focus on social causes, Kurzman said.

The class began Aug. 6 and ended Thursday, though Shakira didn't attended the last few classes, according to course lecturer Robert Cleve. Cleve said he hadn't known she was a celebrity during the course and was astonished to learn she was a pop star.

"She told me she was visiting from Colombia and that she was just doing this for her own enlightenment and enjoyment," Cleve said. "She looked like just an ordinary student. She wasn't flamboyant ... she didn't act like a big celebrity or anything."

Shakira, who sat near the front in the third row of the lecture hall, would often discuss the course material with him after class.

"I was really impressed with how intelligent she was," said Cleve.