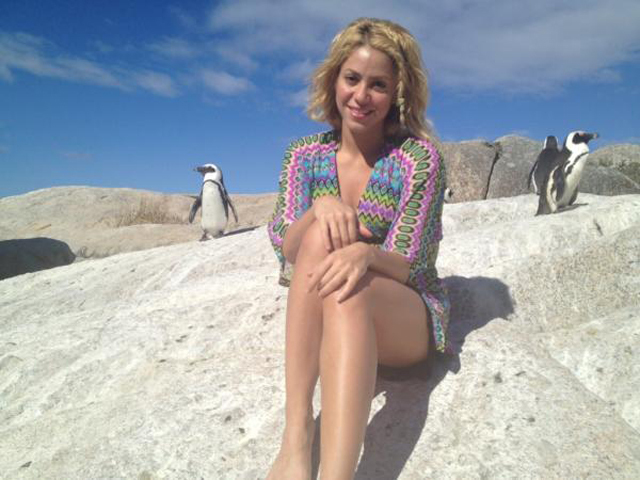 (CBS) Let's just say Shakira should stick with penguins. Over the weekend, the Colombian pop singer got a little too close to a few sea lions while vacationing in Cape Town, South Africa - close enough that one of the aquatic mammals tried to attack her.

"Suddenly, one of them jumped out of the water so fast and impetuously that it got about one foot away from me, looked me in the eye, roared in fury and tried to bite me," she wrote on her Facebook page.

According to Shakira, everyone who witnessed what happened screamed -- as did she. "I was paralyzed by fear and couldn't move," she admitted.

But luckily, Shakira's brother, who was also nearby, came to her rescue.

"I just kept eye contact with it while my brother 'Super Tony' jumped over me and literally saved my life, taking me away from the beast," she revealed. "We both got our hands and legs scratched by the rocks while trying to protect ourselves."

So, why did the sea lion go on the attack?

"I believe what happened is that it confused the shiny reflection of the blackberry I was taking these pics with, with some sort of fish," she explained. "It probably thought I was teasing it with food and then taking it away from it."

Noted: Keep shiny objects away from sea lions at all costs.

Shakira wasn't going to let the sea lion near-attack ruin her trip though. The "Hips Don't Lie" singer mentioned how she was off to see the penguins next and later posted a photo with the caption: "Today with the penguins! Definitely friendlier!!"