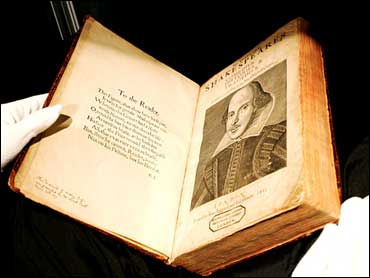 A rare complete copy of the First Folio of Shakespeare's plays, widely regarded as one of the most important books in the English language, sold for $5.2 million at auction Thursday.

One of about 40 complete copies of the book known to exist, and one of the few in private hands, its value had been estimated at between $4.6 million and $6.4 million.

Formally titled "Mr. William Shakespeare's Comedies, Histories & Tragedies," the First Folio was produced in 1623, seven years after Shakespeare's death. It contains 36 plays, 18 of which were published for the first time. Without the book, scholars say, they might have been lost.

CBS News correspondent Mark Phillips reports there would be no "Macbeth," no "Taming Of The Shew," no "Julius Ceasar," nor "All's Well that Ends Well." Says Southeby's auctioneer Peter Selley, "This is undoubtedly the greatest book in English literature."

Some 750 copies of the First Folio were printed, and about a third have survived, though most are incomplete, Sotheby's said. All but a few are in museums, universities or libraries.

"Relatively complete copies of the Folio in contemporary or near contemporary bindings very rarely come to the market," said Peter Selley, Sotheby's English literature specialist. "There is only one copy recorded as remaining in private hands."

The book auctioned Thursday was sold by the trustees of Dr. Williams' Library, a private London library established in the early 18th century under the will of Daniel Williams, a government minister.