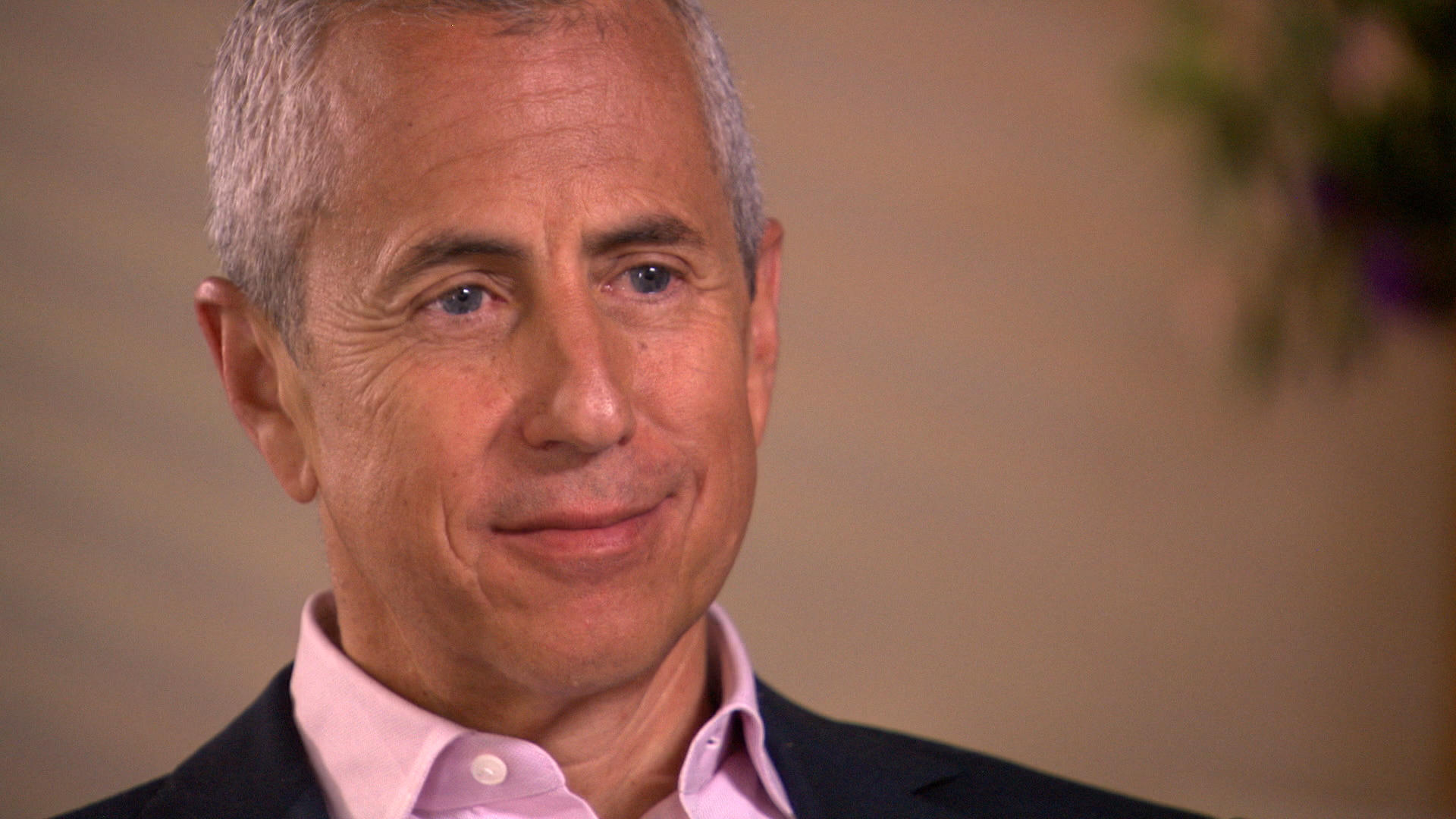 If you've eaten out in the past couple of decades, chances are a restaurateur named Danny Meyer has had a big impact on how your meal went. Since he opened his first restaurant in 1985, the innovations in food, service and hospitality he's pioneered have been so widely copied they've changed the way America dines out. Danny Meyer now runs 15 restaurants, and Shake Shack, the burger joint he opened in 2004, has become a global, billion-dollar chain. But in his most daring innovation to date: Danny Meyer is eliminating tipping in his restaurants, a move, which if successful, may radically alter the way restaurants do business.

Thousands of people line up every day to eat Danny Meyer's food. Here at Citi Field, the home of the New York Mets, some fans come early just to get a taste of Shake Shack. When we were there, the wait was almost an hour long.

ANDERSON COOPER: Have you been to your seat yet? Or you just came straight here--

ANDERSON COOPER: To beat the line?

ROB: You have to. It's the only way you get a burger.

ANDERSON COOPER: Is it worth it?

Danny Meyer says Shake Shack burgers taste so good because he makes them with the same high-quality ingredients he uses in his expensive restaurants, but that still doesn't explain why people are willing to stand in those long lines.

ANDERSON COOPER: It's burgers and it's fries. And it's shakes. You haven't reinvented the wheel here.

DANNY MEYER: We are as sometimes as mystified as anybody as to what the magic of Shake Shack is. I think we know that this is fine-casual. This is a new way of dining--

DANNY MEYER: Fine-casual, which is marrying together the ethos and taste level of fine dining with the fast food experience.

ANDERSON COOPER: So you don't call it fast food.

DANNY MEYER: When did you ever go to Shake Shack and find the experience to be fast?

We went with Danny Meyer to New York's City Madison Square Park – where he created the first Shake Shack in 2004.

ANDERSON COOPER: The reason I haven't had a burger before from Shake Shack is because of the line.

DANNY MEYER: Instead of simply asking yourself, "Is the burger so good that you would choose to wait in line?" I think the question is, "What else are they getting out of the experience? And I think what fast food hijacked was the notion that people actually want to be with people. Their whole promise, was basically, "We're gonna get you out of here so quickly you'll never have to see a person. In fact, we're even gonna give you drive-through lines so you never have to get out of your car." And we're kind of doing the opposite of that.

ANDERSON COOPER:  I'm gonna get a-- cheeseburger, a Shack Burger?

ANDERSON COOPER: There's something about the combination of the bun and the burger.

DANNY MEYER: So if you think about it, a hamburger is basically two things. It's the bun and the meat. And what's great about this bun is that it doesn't fight you as you're eating it. It absorbs juices.

ANDERSON COOPER: It doesn't fight you?

DANNY MEYER: It doesn't fight your teeth. I think it's a mistake if the bun is too big and too hard.

His attention to detail has made Meyer a leader in fast casual dining, or what he calls fine-casual. Although not the largest, it is the fastest growing sector of the restaurant business. Meyer believes many consumers want good food delivered in less time and at less cost than at a full-service restaurant.

Fine-dining is how Meyer started in the restaurant business more than 30 years ago.  He opened his first restaurant, Union Square Cafe, in 1985 in what was then a seedy neighborhood in Lower Manhattan. Back then, people dined out less frequently, and expensive restaurants were often formal, and intimidating. Danny Meyer had a different vision.

DANNY MEYER: I said, "Let's create a restaurant where you can feel great if you're dining alone." So we created a bar for dining at a time when you never got three-star food at a bar in New York City. That was the domain of coffee shops. I wanted to go to a restaurant where I could drink great wines by the glass, so I was just looking to break as many rules as I possibly could. But ultimately to create a restaurant that at the age of 27 would have been my favorite restaurant, if only it had existed.

Meyer has been fascinated with food since he was a child. He grew up in St. Louis -- the son of an entrepreneur and an art gallery owner who loved entertaining and cooking.

ANDERSON COOPER: Do you think about food all the time?

ANDERSON COOPER: Have you always?

ANDERSON COOPER: I, I don't know how to ask this. But, I mean, were you a chubby kid, if you were eating all the time?

DANNY MEYER: I actually was a chubby kid-- by the time I got to be 12 years old, 12, 13, 14. And that's kind of how I always felt thereafter. And so it, it gives me great pleasure that today I can kind of eat as much as I want 'cause I know how to exercise. And I know how to balance it out. But it also probably put me in a position where I love seeing other people eat.

What they all have in common is Danny Meyer's philosophy of hospitality – which he pioneered but has since become a standard for the industry.

ANDERSON COOPER: So the experience of dining out for you is the most important thing?

DANNY MEYER: I think the experience of how you are made to feel is the most important thing.

The key, he says, is to hire people who are intuitive and empathetic. He has more than 2,000 employees, and he trains them to pick up on the customers' cues.

ANDERSON COOPER: This is the reservation system.

DANNY MEYER: Are there any folks here that I'm supposed to be saying hello to today?

SCOTT REINHARDT: We have a regular right here.

In the restaurant business, profit margins are razor thin and repeat customers are critical. Meyer has made an art of making his customers feel welcome, tracking their likes and dislikes.

ANDERSON COOPER: I've also heard you say that you always identify the boss at the table. W-- h-- I didn't realize there was a boss-- at each table. But how do you do that?

DANNY MEYER: Well there-- there's no question in my mind that at every single table there's somebody who's got the biggest agenda. If it's two people doing business, there's someone who's trying to sell something to somebody else. And I think that if you can figure that out early on in the meal, and understand what is it gonna take for the boss to leave happy, it could be make sure that someone else gets to pick the wine. You just gotta pick up on those cues.

Meyer's most controversial innovation is also his riskiest. He is trying to eliminate tipping to combat pay inequities between servers – whose tips have gone up as menu prices have increased – and those who work in the kitchen, who under most state laws can't share in gratuities.

ANDERSON COOPER: So the cooks, dishwashers, they don't get any part of the tip?

Meyer has so far eliminated tipping in nine of his restaurants. He's increased the base pay of both servers and kitchen staff and in some restaurants gives waiters a share of the weekly revenue. He has raised menu prices significantly, on average, nearly 25 percent. But when the bill comes, there's no line for leaving a tip.

ANDERSON COOPER: You call it "Hospitality included." Wha-- why? You don't-- you don't say, "No tipping."

ANDERSON COOPER: So for the customer, in the end, is the bill the same?

DANNY MEYER: The bill, by the time you get your bill, whatever shock you did or didn't feel when you saw the menu prices should completely dissipate, because you should say, "That's exactly what it would have been if they hadn't had this new system"—

ANDERSON COOPER: Plus at the end of the meal, you don't have to deal with the hassle of figuring out what to tip.

DANNY MEYER: That's absolutely true and let's face it, the end of the meal tends to be when people have had more wine than the beginning of the meal, and sometimes people make honest mistakes.

ANDERSON COOPER: There's not a lot of restaurants though-- who are following your lead.

DANNY MEYER: That's absolutely true, and it kind of reminds me of--in 1990, when I decided to eliminate smoking at Union Square Café.

ANDERSON COOPER: That was long before the law actually--

DANNY MEYER: It was 12 years before--

DANNY MEYER: --it became law. And so for me, it's almost immaterial who's doing it besides us. What matters is that – that we're doing it. It could be that we're slightly ahead of our time.  But we're in it to win this thing.

In December, Meyer reopened his first restaurant Union Square Cafe, in a new location. It's another no-tipping restaurant. Minutes before the first customers arrived, Meyer was still making final adjustments determined to deliver a dining experience that would keep them coming back for more.

DANNY MEYER: My mind doesn't shut up. And I'm constantly thinking about, "How could we do this better? How could we make this better? I don't want to ever open a restaurant that if it closed people just wouldn't care.

ANDERSON COOPER: I will say, I mean, it's been now 24 hours since I had my first burger at Shake Shack and a coffee milkshake. I have been thinking about it more than I have thought about food in a long time.

DANNY MEYER: So all you need to know about me after all these questions is that nothing in the last 24 hours makes me happier than hearing what you just said.

Last week, Shake Shack announced that it will test a new concept with its latest restaurant: opening in New York City this month.  There will be nobody taking orders or cash.  Instead, customers will order and pay at touch-screen kiosks or from the Shake Shack mobile app.