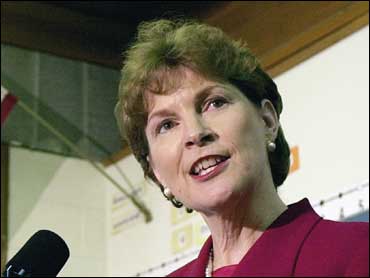 A leading Democrat and former governor of New Hampshire announced Friday she will run for a U.S. Senate seat currently held by a Republican, a move the party hopes will help extend its grip on a legislative chamber they control by a slim majority.

The announcement by former Gov. Jeanne Shaheen comes just days after Mark Warner, another prominent Democrat and former Virginia governor, announced he was running for the Senate seat being vacated by Republican Sen. John Warner, who has held the seat for three decades. The two Warners are not related.

"We have major problems facing this country, and there is an urgent need for real change in Washington," Shaheen said in a statement to supporters announcing her intention to run for the Senate seat held by John Sununu. The Republican had beat her out of the seat in 2002.

Shaheen lost by 5 percentage points that year, but the political landscape has changed dramatically since, mainly because of dwindling public support for the war in Iraq. Recent polls have shown her beating Sununu in a rematch.

"We've proven in New Hampshire that we can work together to get things done. I want to take that common sense approach to Washington and help get this country moving in the right direction," she said.

Republicans, who are grappling with a series of scandals and the U.S. public's mounting frustration with the Iraq war, narrowly lost control of the Senate during last November's national legislative elections. They must defend 22 of the 34 seats during the November 2008 legislative and presidential elections.

National Democrats have made Sununu a top target for 2008 and have already run commercials criticizing his position on the war. His Manchester office routinely draws protesters.

Sununu wants to continue the effort in Iraq at least until Iraqi leaders get their political situation in order and has opposed any timetable for redeploying troops from Iraq. He is also a sponsor of a bipartisan bill supporting the Iraq Study Group's recommendations.

After her 2002 loss, Shaheen became a national co-chairman of Sen. John Kerry's 2004 presidential run and then head of the institute at Harvard's Kennedy School of Government.

With high name recognition, an experienced staff and the ability to raise money nationally, Shaheen, 60, was the subject of a public draft effort and private recruitment by national party officials.

In announcing her candidacy, she immediately becomes the favorite of the four Democrats seen as likely contenders for Sununu's seat. In a Research 2000 poll in July, a prospective candidacy by Shaheen led Sununu by 22 percentage points.

Activist Katrina Swett, Portsmouth Mayor Steve Marchand and former astronaut Jay Buckey fill out the field of Democrats, though Marchand has said he would drop out if Shaheen entered the race.

Buckey said Friday he is in the Democratic primary race to stay.

Sununu was traveling Friday and not immediately available for comment.