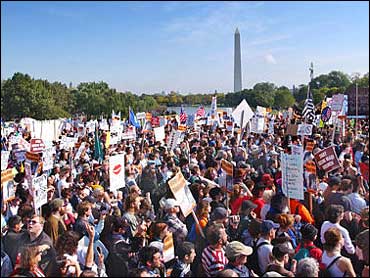 Tens of thousands of anti-war protesters circled the White House on Saturday after Jesse Jackson and other speakers denounced the Bush administration's Iraq policies and demanded a revolt at the ballot box to promote peace.

The protest coincided with anti-war demonstrations from Augusta, Maine, to San Francisco, and abroad from Rome and Berlin to Tokyo to San Juan, Puerto Rico, and Mexico City.

In Washington and many of the other demonstrations, protesters added complaints about U.S. policy toward the Palestinians.

"We must not be diverted. In two years we've lost 2 million jobs, unemployment is up, stock market down, poverty up," Jackson told a spirited crowd in Washington. "It's time for a change. It's time to vote on Nov. 5 for hope. We need a regime change in this country."

Congress has authorized the use of military force to achieve the administration policy of "regime change" in Iraq.

"If we launch a pre-emptive strike on Iraq we lose all moral authority," Jackson told the chanting, cheering throng spread out on green lawns near the Vietnam Veterans Memorial.

"This effort today is part of a world wide effort to choose peace over war, coexistence over coannihilation. To pre-emptively strike Iraq, to kill a lot of innocent people to get to Saddam, is amoral," the Rev. Jackson said, speaking to reporters at a pre-march Washington rally.

A sign showed Mr. Bush's face at the end of two bright red bombs with the caption: "Drop Bush, not bombs."

Another demonstrator's sign said, "Regime change begins at home." Bush administration policy holds that a "regime change" must come about in Iraq, by force if necessary.

Among dozens of speakers, actress-activist Susan Sarandon said, "In the name of fear and fighting terror, we are giving the reins of power to oil men looking for distraction from their disastrous economic performance; oil men more interested in the financial bottom line than a moral bottom line."

The protest brought out the elderly, young parents with babies in strollers, even a man dressed as Uncle Sam wearing dreadlocks and another Uncle Sam, on stilts, with an elongated Pinocchio nose.

Protest organizers claimed up to 200,000 people had answered the call to challenge President Bush's determination to force out Iraqi President Saddam Hussein. Because the U.S. Park Police no longer issues crowd estimates, the size of the crowd could not be verified. As the march began, participants stretched for at least five city blocks.

On a nearby street corner, a handful of Iraqi-Americans staged a counterdemonstration. Aziz al-Taee, spokesman for the Iraqi-American Council, said, "I think America is doing just fine. ... We think every day Saddam stays in power, he kills more Iraqis."

New Englanders ventured out in snow, sleet and rain to join demonstrations in Maine and Vermont. Across the nation a couple thousand showed up at the Colorado capitol in downtown Denver, and demonstrators marched at San Francisco.

The thousands who gathered in cities across Europe, Asia and beyond also displayed vocal opposition to the U.S. policy toward Iraq and demanded reversal of Mr. Bush's Iraq policies.

In San Francisco, demonstrators stretched about a mile as they marched from the financial district to City Hall, carrying placards that read, "Money for jobs, not for war" and "No blood for oil."

In Berlin, an estimated 8,000 people, brandishing placards that declared "War on the imperialist war," converged on the downtown Alexanderplatz and marched past the German Foreign Ministry. Another 1,500 showed up in Frankfurt, 500 in Hamburg.

Another 1,500 rain-soaked demonstrators gathered under umbrellas outside the U.S. Embassy in Copenhagen, Denmark. More than 1,000 marched in Stockholm, Sweden.

In Washington, civil rights activist Al Sharpton addressed Mr. Bush, even though the president was at an economic summit in Mexico.

"It would have been good for you to be here, George, so you could see what America really looks like," Sharpton said. "We are the real America.

"We are the patriots that believe that America should heal the world and not bring the world to nuclear war over the interests of those business tycoons who put you in the White House."