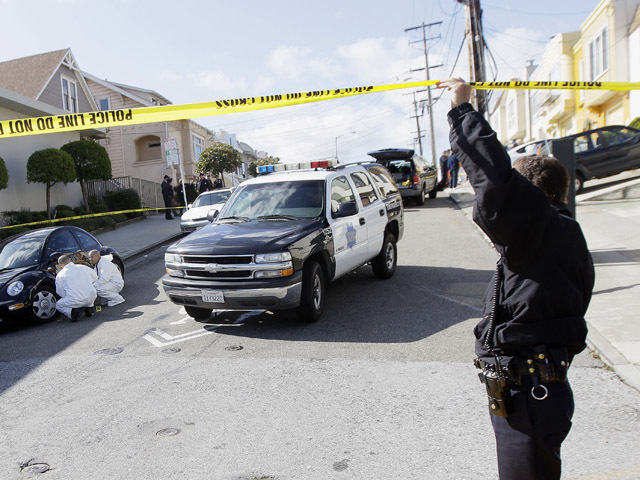 (AP) SAN FRANCISCO - A San Francisco man was arrested Sunday on suspicion of killing five people in a home, leaving a gruesome crime scene that has investigators struggling to identify the victims and determine the causes of death.

The bodies of the three women and two men were found early Friday by a woman with access to the home in the Ingleside District in the southern part of the city. The crime scene was so tangled that police couldn't initially determine whether they were dealing with a murder-suicide, or whether a suspect was at large. They also initially thought that at least two of the victims were shot.

"This was a complex crime scene. We had five deceased persons apparently from blunt force trauma. We didn't know what we had," Suhr said.

The victims still have not been identified and police have not been able to determine the exact causes of death or offer a motive for the slayings. Suhr said 40 investigators were working on the case.

The chief declined to say what led investigators to Luc, saying only that the suspect knew the victims and that an "edged weapon" was involved in the slayings. He said Luc had a prior criminal record, but did not elaborate.

Investigators did not believe the killings were gang-related, Suhr said.

Suhr did not provide details of the younger brother's arrest, saying only that the two lived together.

A man who answered the phone for a number listed for Brian Luc hung up when an Associated Press reporter called.

A woman with access to the home found one man dead in the foyer by the front door, then saw a man and a woman dead in the garage before running out and calling police.

When officers arrived, they found the other two deceased women. Investigators believe the victims were related.

The home near San Francisco's City College has a thriving immigrant community, largely from Asia.