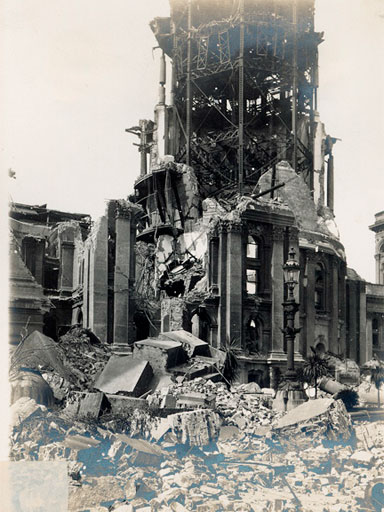 The wreckage of the building and its 300-foot dome became a famous symbol of the quake.

Workers digging on Hyde Street near Fulton Street for a landscaping project found the ruins on Sept. 14, The San Francisco Chronicle reported Monday.

Archaeologists from the federal General Services Administration, which owns the adjacent former federal building, were called to examine the foundations.

"We were surprised to see it," said Rebecca Karberg, historic preservation specialist for the GSA. "You really never know what's under the surface."

Workers broke ground on the original City Hall in 1871, and the cornerstone was laid the following year. The building opened in 1897 after design changes, cost overruns and political scandals.

A minor earthquake the next year damaged the building, which collapsed completely during the 1906 earthquake. The big quake struck in the early morning, so only a few police officers were in the building at the time and all escaped without injury.

It had been the largest municipal building west of Chicago.

When architects and historians finish documenting the ruins, construction will resume on the landscaping project.

"We will bury it all again," Karberg said.